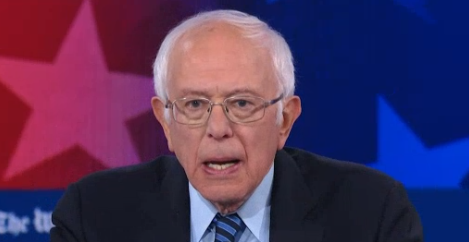 The news stories about Bernie Sanders’ talking about Palestinians did not say the whole story:

Bernie Sanders got applause at a Democratic presidential debate when he said it not good enough to be pro-Israel, and called for treating Palestinians with dignity.

Sanders, a Vermont senator and among the front-runners in the race to garner the Democratic nomination, was one of several candidates asked Wednesday by MSNBC/Washington Post moderators whether they would take a tougher stance on Saudi Arabia, considering its human rights abuses.

All the candidates said they would be less conciliatory to Saudi Arabia, and Sanders, who is Jewish, volunteered that he would also be tougher on Israel.

When I read this, I thought it was no big deal. I also think the Palestinians should be treated with dignity. Who doesn’t? But if that “dignity” is at the expense of Israel’s security or Jewish rights – for example, allowing unlimited imports to Gaza that can include weapons or weapons parts would violate Israelis’ right to life. or making Hebron Judenrein would violate Jews’ rights of worship and access to their holy places. But no one is against dignity. Israel gives out tens of

Sanders’ remarks, in context, were far worse than this. In fact, they were both clueless and dangerous.

When we rethink our American foreign policy, what we have got to know is that Saudi Arabia is not  reliable ally. We have got to bring Iran and Saudi Arabia together, in a room, under American leadership, and say we are sick and tired of us spending huge amounts of money and human resources because of your conflicts.
And by the way, the same thing goes for Israel and the Palestinians. It is no longer good enough for us simply to be pro-Israel. I am pro-Israel. But we must treat the Palestinian people as well with the respect and dignity that they deserve. What is going on in Gaza right now, with youth unemployment at 70 or 80 percent, is unsustainable. So we need to be rethinking who our allies are around the world, work with the United Nations, and not continue to support brutal dictatorships.

Although the dignity line got applause, this was not Sanders’ main point. He thinks that the US can treat the other nations of the world like unruly children and good parenting can solve intractable conflicts.

His plan is for the US to get Saudi Arabia and Iran in a room and tell them to fix their differences is so unbelievably naive as to make one wonder why anyone takes his foreign policy seriously. Does he know anything about their enmity? About the religious aspects of their conflict? About how much Sunnis and Shiites hate each other?

Beyond that, he is expressing an equivalence between how the US should treat Iran and Saudi Arabia. Both of them are brutal Islamist regimes, but only one of them has rallies and posters and speeches every day that say “Death to America.” What possible logic is there to treat our allies – flawed as they are – the same as those who proudly declare themselves to be our enemies? The only thing worse would be to treat Iran as a partner and throw Saudi Arabia under the bus – which is what Obama did. If Democrats are rightfully upset at the US abandoning the Kurds, why do some want to do the same to the Gulf Arab states?

Sanders wants to do the same paternalistic negotiating idea with Israel and the Palestinians. Wonderful. Has he researched the reasons those talks didn’t work out the last half dozen peace initiatives? Hint: it wasn’t Israel that said no to peace.

But Sanders wants to stick with the exact same failed script, a script that has brought us absolutely nowhere. He thinks that US pressure, undoubtedly only against Israel.

Does he even have a clue that Hamas and Islamic Jihad are funded by Iran, and the latter now acts as an Iranian proxy? That no amount of negotiation with the Palestinian Authority will change that?

And, as I’ve mentioned before, Sanders does not seem to know much about Gaza either.

(His segue at the end is most concerning. It almost sounds like he is implying that treating Israel as an ally should be rethought, but he probably pivoted back to Saudi Arabia. Probably.)

Why is no one reporting on the sheer stupidity of Sanders’ peace plan for Saudi Arabia and Iran?