I am pleased to announce that Petra Marquardt-Bigman is the newest writer at EoZ. Petra is a German-Israeli freelance writer and researcher with a Ph.D. in contemporary history. She has had blogs at the Jerusalem Post and Times of Israel and has also published pieces in major newspapers.

Under the somewhat cynical title “Ben Ehrenreich Throws Stones at Conventional Wisdom About Israel,” The Forward recently gave Ehrenreich a platform to promote his new book, in which the Tamimis of Nabi Saleh and the myth of their supposed “non-violence” play a central role. EoZ has already exposed some of the most preposterous deceptions contained in an excerpt of Ehrenreich’s book, but the biggest deception Ehrenreich peddles is the myth of Palestinian non-violence. The apparent goal is to convince Americans that “we do need to stop funding this occupation,” or, as Ehrenreich put it in another recent interview: “the fact that the lockdown on criticism of Israel is now breaking up is a real opportunity. We shouldn’t forget that $3.1 billion American tax dollars goes to the Israeli military and that the US is in an absolutely direct way paying for what is happening over there … Americans who care about this have to make sure that it is not just questioned but powerfully challenged in a way that the political leadership in this country can no longer afford to ignore.”
Leaving aside Ehrenreich’s real or pretended cluelessness about US support for Israel, it is noteworthy that he acknowledges in the Forward interview “that people have been killed by stonethrowing and people have been injured by stones. Of course stones hurt if you’re hit by them.” But he claims the IDF confirmed to him that there are “no records at all of any soldiers ever being killed in a stone-throwing incident.” So Ehrenreich feels it is justified to wonder if there is “no form of Palestinian resistance so innocuous that it wouldn’t be condemned?” (Incidentally, Rabbi Alana Suskin, Director of Strategic Communications at Americans for Peace Now, quoted this question when she promoted Ehrenreich’s Forward interview on Twitter.)
So never mind the civilians – including children – who were killed or maimed by Palestinian rock throwers.
But when it comes to the Palestinian “resistance” that Ehrenreich so eagerly glorifies, he knows full well that neither the Tamimis nor the Palestinians in general are keen on anything “innocuous”. As polls of various reputable organizations going back almost two decades amply document, Palestinians have long been ardent supporters of violence and terrorism. Consider the following examples from Daniel Polisar’s important study:
“For most of the last decade-and-a-half, suicide bombings, which have generally been aimed at civilians and have been the most lethal in their impact, have enjoyed the support of solid Palestinian majorities. On 17 occasions between April 2001 and March 2013, JMCC asked, ‘How do you feel toward suicide-bombing operations against Israeli civilians?’ Supporters outnumbered opponents all but four times, and on average the level of support exceeded opposition by a full twenty points.”
Even when the victims are not Israelis, Palestinians enthusiastically support violence and terrorism:
“[Palestinians] led the world over the course of a decade in believing that Osama bin Laden, the mastermind behind the 9/11 attacks and a vociferous foe of Israel, could be counted on to ‘do the right thing in world affairs.’ In 2011, the last time Pew asked about bin Laden before his death at the hands of American commandos, the Palestinians once again outdid all others in their admiration, just as they did on various occasions in their favorable assessments of al-Qaeda—and (the one time they were asked in a Pew survey) of the Taliban.”
Moreover, while Ehrenreich laments Palestinian casualties in confrontations with Israel and the Forward notes with apparent admiration that he “makes no bones about siding with the losers,” the Palestinians themselves are firmly convinced that they are winning:
“a PSR survey that appeared after the August 2014 ceasefire ending the latest war between Israel and Hamas … reported, among other findings, that fully 79 percent of Palestinians believed Hamas had won the war and only 3 percent saw Israel as the victor. So convinced were respondents of their side’s strength that nine in ten favored continued rocket fire at Israel’s cities unless the blockade of Gaza were lifted, 64 percent declared their support for ‘armed attacks against Israeli civilians inside Israel’ (meaning, among other things, suicide bombings in Israeli population centers), and 54 percent applauded the event that in large measure had precipitated the 50-day war: the abduction and murder by Hamas operatives of three Israeli teenage boys hitchhiking home from school.”
As I have shown in a comprehensive documentation, the Tamimis of Nabi Saleh, who play such a central part in Ehrenreich’s new book, are absolutely representative of such “mainstream” Palestinian support for violence and terrorism. Back in 2013, Ehrenreich himself acknowledged in his New York Times Magazine tribute to the Tamimis that the family included several murderers – most notably Sbarro massacre mastermind Ahlam Tamimi – and that these murderers were greatly admired and “much-loved.”
Even though Ehrenreich’s reporting seems exceptionally unreliable, he got it right on this issue. The perfect illustration for just how right he got it are the first two people he profusely praises in the Acknowledgements at the end of his new book: the prominent Nabi Saleh “resistance” leaders Bassem and Nariman Tamimi. As I have shown in a previous EoZ post, both Bassem Tamimi and his wife Nariman (as well as their famous daughter Ahed aka “Shirley Temper”) are Facebook “friends” with a certain “Princess of the Free” – and the content posted by this user indicates that this pseudonym is used by Ahlam Tamimi, who displays as her profile and cover pictures images of Izz al-Din Shuheil al-Masri, the terrorist whom Ahlam sent to detonate himself in the crowded Sbarro restaurant in Jerusalem on August 9, 2001, killing 16 civilians , including 7 children and a pregnant woman, and wounding some 130 other people. 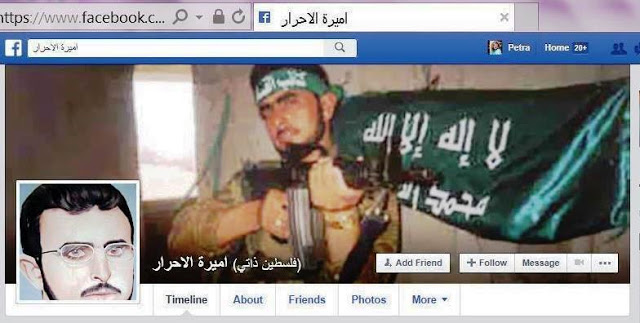 Nariman Tamimi has repeatedly shared posts from this page, including two posts last fall that called on individuals to perpetrate terror attacks on their own initiative and with whatever means they have available – in other words, something of a blueprint for the kind of “lone wolf” attacks that have characterized the wave of terror attacks that started last fall. Moreover, in remarks reported by an Israeli news site last September, Nariman Tamimi explicitly justified the Sbarro bombing as “an integral part” of the Palestinian struggle, declaring that “everyone fights in the manner in which he believes. There is armed uprising, and there is popular uprising. I support every form of uprising.” 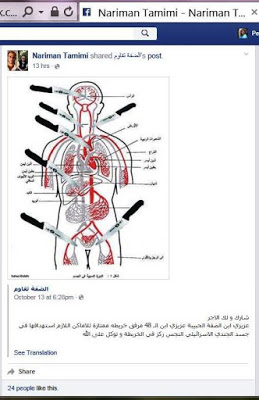 And indeed, Nariman Tamimi’s Facebook posts provide ample evidence that she supports every kind of terrorism: she not only posted graphic instructions on the most lethal stabbing techniques, but also hardly ever failed to hail the perpetrators of terror attacks as heroes and glorious “martyrs.” One example is a post* Nariman Tamimi shared in the evening of March 8, glorifying the “General [grand master] of knives” who had just killed US Army veteran and Vanderbilt student Taylor Force and injured ten other people in Tel Aviv.
And while Ben Ehrenreich was busy promoting his book that glorifies the Tamimis, the Tamimis were busy glorifying* the teenaged murderer of a 13-year-old Jewish girl who was sleeping in her bed: as far as the Tamimis are concerned, this murder was a noble act that was necessary “to return to the homeland its awe/reverence”.
Whether the terror victim is a young and accomplished American stabbed to death while visiting Tel Aviv as a tourist, or a 13-year old girl butchered in her bed by a Palestinian youngster just six years older than her doesn’t really matter to the Tamimis: they will always feel admiration and patriotic pride. Ben Ehrenreich likely knows that, he just doesn’t want his readers to know it.
* Archived versions of the posts are here & here (time stamps do not correspond to Israel time); translations from Arabic courtesy of Ibn Boutros.