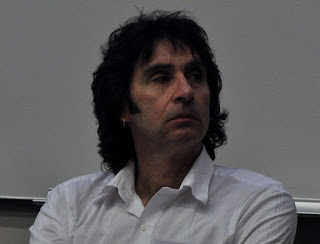 One of the advisors for the US Campaign for the Academic and Cultural Boycott of Israel is NYU sociologist Andrew Ross.

It is no surprise to find out that Ross is yet another academic fraud. It took me about two minutes to find this among his writings for an academic labor journal:

The recent ugly backlash against the American Studies Association’s (ASA) decision to join the boycott of Israeli universities should have surprised no one. …The tactics of intimidation and thuggery deployed by some organized supporters of Israeli policy should remind us of the military violence at the heart of the colonial occupation in Palestine. Indeed, that is the unspoken intention behind these threats. Somewhere behind all of the bullying and verbal posturing lies the metallic decree of armed force.

Yes, this esteemed academic says that if you oppose discrimination against the Jewish state, you are effectively threatening to shoot BDSers point-blank with Merkava tanks.

The funny thing is that Andrew Ross was the editor of Social Text in 1996, when that journal was the victim of a brilliant hoax to prove that people like Andrew Ross have literally no concept of reality.


From 1986 to 2000, Ross served on the editorial collective of Duke University‘s journal Social Text. In 1996 he was one of the journal’s editors who published a paper byAlan Sokal professing to show connections between physics and post-modern theory, and which was later revealed by Sokal to be a hoax meant to expose the low academic standards of “post-modernism” (see Sokal affair). Ross was among the editors of Social Text who were awarded the 1996 Ignoble Prize for Literature for his part in being taken in by the hoax.[1]Ross’s involvement in the Sokal hoax gave rise to criticism from outside the area of his academic specialisation. In an article in Nature {Published in Nature, 9 July 1998, vol. 394, pp. 141–143} Richard Dawkins said [2] “Ross has the boorish, tenured confidence to say things like, “I am glad to be rid of English departments. I hate literature, for one thing, and English departments tend to be full of people who love literature”; and the yahooish complacency to begin a book on ‘science studies’ with these words: “This book is dedicated to all of the science teachers I never had. It could only have been written without them.”


The results of my little experiment demonstrate, at the very least, that some fashionable sectors of the American academic Left have been getting intellectually lazy. The editors of Social Textliked my article because they liked its conclusion: that “the content and methodology of postmodern science provide powerful intellectual support for the progressive political project.” They apparently felt no need to analyze the quality of the evidence, the cogency of the arguments, or even the relevance of the arguments to the purported conclusion.

This is the entire modus operandi of the anti-Israel crowd. They choose the conclusion first – that the Jewish state is a uniquely evil regime – and then they believe or fabricate any evidence, no matter how tendentious, to support their foregone conclusion. This is why you cannot argue with them: facts are inconvenient obstacles to their sacred goals.

It is no wonder that someone for whom opinion trumps truth is someone who is active in attacking the only state in the Middle East with true academic freedom.