‘The BBC openly admits it is a leftist monoculture where right leaning thought is unwelcome (and unlikely to be hired). Driven by a passion for “woke” social engineering, it has lost most of its credibility hard won over many decades. I disagree strongly with being legally forced to pay for its monstrous overpaid bureaucracy and unwanted propaganda. Let it fund itself from the market and if it fails, it is no loss. It has ceased to be a credible voice for the UK and its programming has moved from exemplary to dire in a generation.’

So states, and it’s spot-on, one of the numerous respondents to an apologia for the BBC written recently on Linked In by BBC newsreader and presenter Huw Edwards.

To quote Craig, who co-runs that splendid site, Is the BBC Biased?:


‘All I’ll say about it in advance is:

– that in Paragraph 1 Huw puts on his tin foil hat and pushes a conspiracy theory that most criticisms of the BBC over bias are part of some malign attempt to “cause chaos and confusion” and “undermine trust in institutions” rather than being manifestations of genuine anger by large numbers of licence-fee-paying (and non-licence-fee-paying) individuals. He sounds slightly hysterical and silly, don’t you think?

– that Huw’s tone of chippy complacency might not be the best way of winning the argument.

– that Huw seems oblivious to the point that it’s actually groupthink arising from the BBC’s narrow recruitment processes which is the main problem (similar backgrounds, similar outlooks); indeed, he maintains the remarkable proposition that the BBC consists  “of all backgrounds…and outlooks”, which is demonstrably untrue.

– that the ‘complaints from both/all sides’ argument doesn’t hold water, never mind how many times it’s repeated by BBC supporters. Some sides may be right, others not.

– that the BBC’s rage against “the social media age” is becoming ever more strident.’

There are many reasons to despise the BBC’s news and current affairs output: its disgraceful flouting of its Charter and its Producers’ Guidelines, which obligate it to be impartial and objective in its reportage and commentary; its smun self-congratulatory assumption that it provides the best in journalism (despite frequent lapses nowadays into dodgy grammar like the one seen in this screenshot: even not-so-young Beeboids seem to have dispensed with correct plurals); its growing obsession with jumping on anti-white and anti-male bandwagons in its choice of “news” items; its reflection of Guardianista-type concerns in its online pages; its choice of the leftist Guardian, alone of newspapers, as a vehicle in which to advertise job vacancies; its frequent anti-Israel slant.

One of the respondents to Huw Edwards’ rant is none other than fellow Beeboid David Waddell, who echoes an old but discredited BBC standby:

In the lead up to Christmas, the BBC, its in-house tolerance for its own overt anti-Israel bias originating with pro-CAABU presenter Keith Kyle back in the 1960s as I show here,  has been indulging its devious habit of cramming its Yuletide content full of brazenly biased stories concerning Israel and the Palestinian Arabs Palestinians.

We haven’t yet, as far as I’m aware, had a repeat of Al Beeb’s much-hyped stories about Palestinian shepherds and wise men (that it has in the past had a habit of carrying along with The Guardian, no coincidence apparent).

But, that may be to come, and very shortly.

Meanwhile, for instance, on BBC Newsround, aimed at youthful audiences, we’ve recently had this arboreal extravaganza, in which no less than three Palestinian Christmas trees (in Bethlehem, in Gaza, and in Ramallah) were given starring roles in a post that featured a total of just seven “around the world”.  Another of the BBC’s features aiming to turn youngsters against Israel, of course.

Both BBCWatch (see its post here, in the aftermath of its original, after which Al Beeb increased the total number of trees from seven to eleven!)  and David Collier highlighted that grotesque piece, most ably.

And then there was this, Barbara Plett Usher’s report from a Christian Palestinian village, the supposed sanctuary of St Barbara, which as well as making a dishonestly phrased swipe at Israel happily glossed over the reasons for the diminution of the Christian minority in region; BBCWatch has the report’s measure here and concludes:


‘it is interesting to see that Barbara Plett Usher chose to highlight that vague and context-free story from over seventeen years ago in what was billed as a report about a Christian feast day while ignoring the fact that a church in the same village was vandalised just months ago.’

(As Barbara Plett, Usher, whose late husband Graham was an anti-Israel journalist-activist, notoriously cried for the old rogue Arafat when he was on his deathbed, of course.)

The BBC’s penchant for liaising with the leftist Israel-bashing group B’Tselem for stories and for opinions regarding developments in Israel can be seen in this beat-up.

And now we have this:


‘A manger scene by British artist Banksy has appeared at a hotel in Bethlehem in the West Bank.

Dubbed the “Scar of Bethlehem”, the work shows Jesus’s manger by Israel’s separation barrier, which appears to have been pierced by a blast, creating the shape of a star.

On Instagram, the artist said the work was a “modified Nativity”.

Israel says the barrier is needed to prevent terror attacks. Palestinians say it is a device to grab land.

The International Court of Justice has called it illegal.

Banksy’s work is in Bethlehem’s Walled Off hotel, which is itself a collaboration between the hotel’s owners and the artist.

Hotel manager Wissam Salsaa said Banksy had used the Christmas story to show how Palestinians in the West Bank were living.

“It is a great way to bring up the story of Bethlehem, the Christmas story, in a different way – to make people think more,” he said….’ 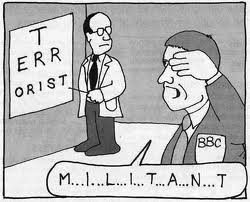 BBCWatch does yeoman service in exposing the arrogant Corporation’s frequent antipathy towards the unbiased truth regarding the Israel-Arab conflict.  But what of the official communal leadership of British Jewry?

Where, one wonders, is the Board of Deputies of British Jews in all of this?  Do they protest BBC bias as strenuously as they should? Or are they content to see public opinion influenced by Israel’s foes?

It is not pro-Israel bias that critics of the BBC’s Middle East coverage seek.  It is scrupulous objectivity that they expect on the part of the licence-funded national broadcaster.