They’ve been gearing up for quite a time now, the Israel haters behind the Balfour Project (it has been claimed, rightly or wrongly that the person who registered the domain name was a certain soon-to-be-ex-vicar).

Here’s a photograph of two members of the Scottish Parliament, posing gleefully outside Holyrood with  anti-Balfour propaganda.  Both are in favour of a unilaterally recognised state of  Palestine. 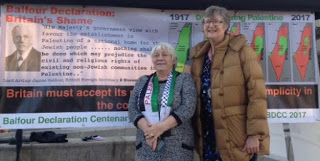 On the left of the picture stands Sandra White MSP, of the Scottish Nationalist Party (SNP).

Got into a beastly spot of bother a while back did short and and perhaps not so sweet Sandra, co-convenor of the cross-party group on Palestine at Holyrood.

She retweeted an antisemitic cartoon showing a porcine beastie with wee porcine beasties representing Israel, Isis, Al Quaeda and so on suckling at its udders and the word “Rothschild” written across its belly.

This caused outrage in many quarters, including calls for her prosecution, but with the SNP’s backing Sandra weathered the storm.  The retweet had been made “accidentally”.  Apparently.

Standing on the right of the above photo is Benenden-educated Labour Party MSP Claudia Beamish, who’s prone to call the Arabs the indigenous people of Israel.  Her Jewish great-grandma knew better.

Claudia’s father, you see, was one of the Big Beasts of the Israel-hating movement, and a Tory backbencher at that.  He was  none other than Colonel Sir Tufton Beamish (l917-89), made a life peer as Lord Chelwood in 1974.  Outspokenly hostile to Israel’s creation, he was a member of CAABU’s general council (I blogged about that particular nest of vipers here) and later formed a pro-Arab pressure group within the Tory Party.

Sir Tufton was halachically a Jew, though he seems to have concealed the fact. His mother was the sister of Sir Ernest Simon and his maternal grandmother was an active shul member in Manchester and a Zionist, no less!

At least he didn’t call himself an -as-a-Jew!

Now that the centennial year of the Balfour Declaration has arrived a number of anti-Balfour initiatives besides the Balfour Project are in existence.


‘are fronting the Balfour Apology Campaign, led by the London-based Palestinian Return Centre, which is seeking an official apology from the British government for issuing the Declaration “which has caused so much damage”….’

We all know what would happen to Israel if the Return Centre had its wicked way.  And all members of that trio have form when it comes to Jews and Israel: all, as that article reminds us, have made antisemitic remarks. It adds:


‘Simon Johnson, chief executive of the Jewish Leadership Council, said it was “a ridiculous argument” and “a futile and hate-filled campaign”.

He added: “What they are doing is asking for an apology for issuing a non-binding statement of commitment that was the first step towards the establishment of a Jewish homeland. That is as close to denying the right of Israel to exist as I can think of, and should be called out as anti-Semitic.”’

And here’s someone who should be called out as antisemitic, Pippa Bartolotti, formerly leader of the Welsh Greens and now, to quote her official Facebook page, their “deputy spokesperson”.

She has displayed her antisemitic credentials before, as I have shown, with references to the “Roth[s]childs”.  (Google Daphne Anson Pippa Bartolotti for my previous posts on this lady).

Pippa Bartolotti has given her ten pence worth on the Balfour Declaration.

Here she is on 2 March this year: 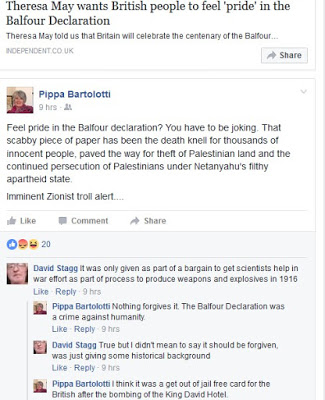 A conspiracy theorist gets into the act: 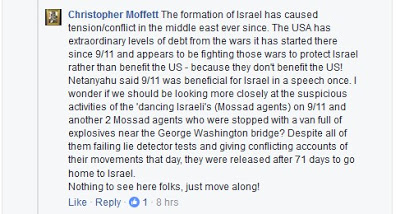 And who hastened to “Like” that 9/11 Israel did it conspiracy theory? Step forward the lady herself: 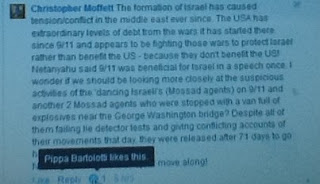