TOP NEWS
http://elderofziyon.blogspot.com/2019/12/bahrain-textbooks-used-today-insult-jews.html
Bahrain is universally considered one of the most moderate,and least antisemitic, Arab regimes.
But everything is relative.
From Studies in the Sira (Prophetic Biography) – High School level –  Tenth Grade 2018 (Third edition)
pages (75-78)
Chapter 5
The Danger of the Jews and the Hypocrites on Islam and the Muslims 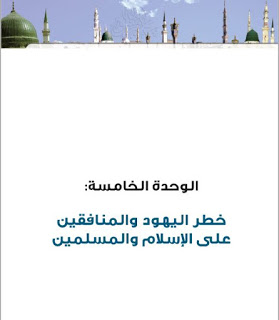 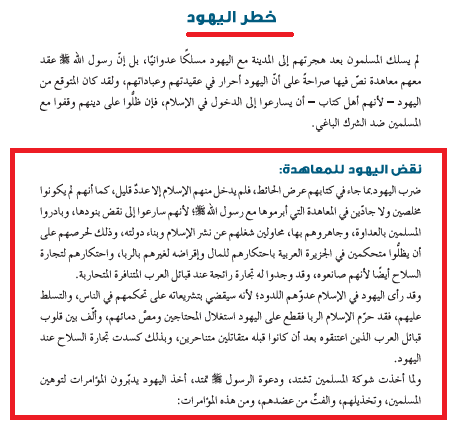 The Jews Breaching Treaties:
The Jews ignored what was mentioned in their book and didn’t enter Islam except the very few.

They were not loyal nor serious regarding the treaties they signed with the prophet, they quickly breached them, showed hostility towards the Muslims, attempting to pre-occupy the Muslims from spreading Islam and establishing a state so that they could remain in control of the Arabian Peninsula through maintaining a monopoly on money and loaning it to others with usury as well as having a monopoly on weaponry they manufactured in which they found it to be a profitable trade amongst the fighting Arab tribes.
The Jews saw in Islam an arch-enemy, since the (Islamic legislation) will end their control and dominance over people as Islam forbids usury which (put a stop) to the Jews from exploiting the needy and sucking their blood.
The fighting Arab tribes became compassionate after embracing Islam which lead to a slump in weapons trade for the Jews.

When the thorn of the Muslims intensified and the prophet’s dawah (invitation to Islam) extended, the Jews took part in conspiracies to weaken the Muslims and disgrace them.

The next pages go into details of the four conspiracies, which are: 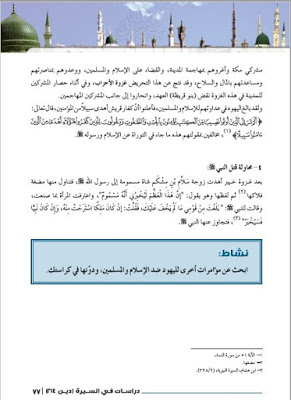 Activity
Search for other conspiracies by the Jews against Islam and Muslims and write it in your notebook.

“The Jews claim usury is a necessary system the world economy is based on that you can’t get rid of so they could remain taking advantage of world’s wealth, the economists responded to them and determined usury is a corrupt system and the reason for world crises as it increases the money for the lenders and reduces the consumer purchasing power”