This year’s Baghdad International Book Fair 2018 has witnessed an unprecedented cultural openness, writes David (Khedher) Selim Basson, Chairman of the Association of Jewish Academics from Iraq in Israel.  The man who did more to pave the way to this openness was the late Professor Shmuel Moreh, Basson’s predecessor. 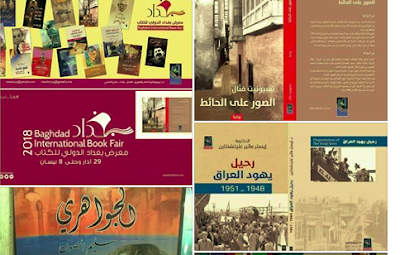 “Books by writers from the first generation of Iraqi Jewish immigrants and their descendants (second generation) were exhibited. Most of these writers lived or are living in Israel. In addition, many books related to the Jews of Iraq, their history, heritage and personalities, published by the publishing houses in Iraq such by the leading house Mesopotamia, were exhibited at the fair.

This openness needs to be commended. It contributes to building bridges of knowledge, culture and rapprochement between Iraqi and Israeli intellectuals, especially those from Iraqi roots. Real peace is built from the roots.

The Association of Jewish Academics from Iraq, in Israel and its founder, Prof. Shmuel Moreh, have played a great role in building this bridge. We welcome the exhibition of these books in Baghdad fair and we pledge to all intellectuals that we will continue this role, and stretch out our hands to all Iraqi and Arab intellectuals.