Ayelet Tsabari, Israel’s only Yemenite author with a global audience, has written a second book, The Art of Leaving. This interview with Tsabari in Haaretz also looks at Mizrahi women artists through the prism of ‘identity politics’. (With thanks: Lily)

Back in 1988, 21-year-old Ayelet Tsabari was just like thousands of other Israelis celebrating the end of their mandatory army service by backpacking to India and the Far East. But unlike the other young Israeli travelers, she never headed home, choosing instead to embark on a journey that would last for decades. 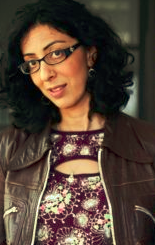 On a quest to escape Israel, the traditions of her large Yemeni family and the grief of losing her father at a young age, Tsabari exiled herself to New York, Thailand and India. She embraced the nomadic lifestyle, falling in and out of love with men and women, experimenting with drugs and alcohol, and occasionally waiting tables in order to earn enough money to set out on the next adventure.

Wind the tape ahead several years and Tsabari finds herself following her new husband — a fellow traveling spirit she met in India — to Canada. The marriage did not last, but she stayed on. This wild tale of a modern wandering Jew could have ended there but, tired from years of instability, Tsabari tried to reawaken her old passion: writing. She had been a promising young journalist in her teens, writing regularly for the Israeli daily Maariv.

But now, in her thirties, the Israeli adventurer had not written in years. And when she did, what emerged were scrambled journal entries in a mixture of Hebrew and English. In 2006, she published her first work in English. In its wake came 2013’s debut collection of short stories, “The Best Place on Earth.” She continued trying her hand at essays — until it became clear that, together, the essays and stories were a joint attempt to explain to herself why she had fled her home and what she had been running away from.

The fruits of her labor saw the light of day this February in the form of her befittingly titled memoir “The Art of Leaving.”In conversation with Haaretz in Tel Aviv — where the 46-year-old moved with her second husband and daughter 11 months ago — Tsabari admits she initially felt uncomfortable with the book being labeled a tell-all. “I never thought I was going to write a memoir, there’s something a little crazy about it,” she says, while acknowledging that these were stories she had to tell.

“I had lived my life making sure I would have them, I was collecting stories,” she notes. Some of those stories were not just her own. In one of the book’s first essays, “A Simple Girl,” Tsabari describes how marginalized she felt growing up as an orphan in a family of Yemenite descent in 1970s Israel.While many other Mizrahi Jewish writers have written about the racism directed at their families by Ashkenazi Jews in the early years of the state, accounts of the abuse suffered by the Yemenite community — which was historically looked down upon by other Jews — have only begun to emerge in recent decades.