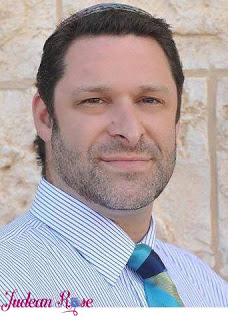 It was a morning like any other here in Israel, the day that Ari was taken from us. A blue, cloudless sky, a cup of coffee, Facebook. The making of lists, the folding of laundry, punching the clock at work. You cannot know when you wake up, the nature of the day, the evil it holds, and the holiness.

Until you know. Until the family Whatsapp pings: “Everyone ok? Pigua tzomet hagush* 2 injured.”
Telling your heart to be still, you think: “My husband.”
You do a head count.
Then you know it’s not your family, and the wondering begins. Who is it?
And it comes to you. You don’t know why and you push it away, the knowledge. But somehow you know. It’s Ari Fuld.
There is no reason to think it. No reason this particular name comes to you. You don’t know why you know, but you do.
(Later a friend tells me she had the same premonition. “I had the same premonition but refused to voice my suspicion. Instead I sent text messages to him that went unanswered and kept watching the ‘last seen at 11:02’ line, hoping it would change.”)
Maybe I knew because always, the best of us are taken. Because whom else would God take like that, a holy martyr, but the best of the best?
And so it had to be Ari, a voice of truth in a great wilderness of evil. Whom else would evil want to still, squelch, silence, but Ari? Which meant that it was never his broad, strong back that presented itself as a target, but goodness and light, the truth.
After the fact, many spoke of conspiracy, of targeted assassination. But I know in my heart it was not. The Ari I knew would never have left himself open like that for so long. It was meant to be, a cosmic battle.
Now it might seem to some that evil won, because Ari was taken from us in a cruel and horrible way. And they aren’t wrong. A terrible evil was unleashed, a precious gem fitting only for the King’s crown stolen by blood-sullied hands.
But at the moment the awful news filtered down to our nation, a greater force was unleashed, our nation was seized with the knowledge of Ari’s holiness, his purpose, and we were as one!
Those of us who chose to be as one.

And there are many of us.

Ari would tell you, if he were here, that the forces of evil are great in our day, but while our numbers are smaller, our impact is greater, more important. And you can know it with your heart when you see the tidal wave of grief that has swept through our nation. You know it at midnight as an orderly crowd sings quiet songs of faith as one, brought together in a pine-scented space in the land Ari loved, he the Lion of Judah, us now the inheritor of his torch, to light the way of truth, to never give up.
To always love the land and own it, and know deep down that God gave it only to us. To know that we are the stewards of this land and that each and every one of us has a responsibility to know this truth deep in our hearts.
Ari would want us to finally glean the takeaway: The land is ours if we earn it and it is our duty to claim it at every juncture and never weaken, to never give an inch. Not of land and not of ideology.
Because this is important work: the most important work there is. And it’s all about the truth and seeing the truth, fighting for the truth in all its colors and clarity, a sparkling brilliant thing.
Ari taught us that the truth and the land are things to love. And the simple truth is that this beautiful land is ours and always will be. The truth won last night, as Ari found his final resting place where his bones and flesh would nourish the land he loved, and become one with it.
Ari is now part of our land and our truth. And we will carry him with us always as we fight the forces of evil and keep desperate hold of what we are destined to hold and cherish. Ari lit the way for us, made the path so clear, so simple. He fought with knowledge and with truth, and when push came to shove, with his hands and feet and a weapon of cold steel.
We too, must be ready to fight with everything we’ve got. No matter what we’re called to do. No matter what situation or evil ensnarls us, surrounds us, confronts us.
The truth is all that matters. Ari knew that and he knew what he had to do. He was always encouraging others to fight the fight in their own way, with their own special God-given tools.
It was never about him, what he did, who he was. It was all for our nation, our people, our land. A single thread of truth connecting all these strands. That’s who Ari was.
And when we lost him, we gained the knowledge of just how holy he was, and the nature of his work as it had been all along. Last night looking at the thousands who came to say goodbye to Ari, I knew it and felt it: along with the great cloak of sadness that descended on our people, a bright light of faith and holiness shone through. We knew as one what we had lost, a national tragedy, and in our hearts, all of us pledged faithfulness to God and to the way before us.
Ari had been stolen from us, but the impact of his cruel, tragic murder had lit the way, revealing how he’d lived his life and left a hero, a shining star to guide us, always there.
Forever.
Yehi zichro baruch.
*Terror attack at the Gush Etzion Junction