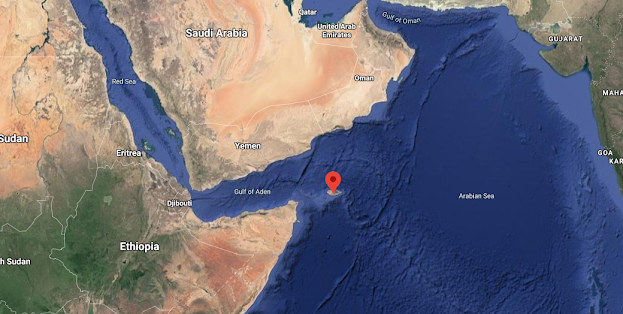 The Turkish Daily Sabah site has an article surveying various rumors and reports that Israel and the UAE are establishing intelligence bases and listening posts on the strategic island of Socotra which is at the entrance to the Gulf of Aden. The bases would allow Israel to monitor electronic intelligence from Sudan, Yemen, ISIS, Ethiopia and even naval movements of Iran and Pakistan and all shipping that goes through the Suez Canal.
Socotra has been under Yemen’s control, but the UAE took it over in 2018.
How true is this story? It certainly makes sense that Israel would be interested in that island, and Israel and the UAE have shared intelligence for years before going public.
Seth Frantzman in the Jerusalem Post writes about the story indirectly, using it as an example of how one cannot be sure what information is accurate when it comes from sources like Turkey that have an agenda and how rumors get “laundered” into seemingly legitimate stories. This of course happens all the time including in Israeli media, where (for example) Kuwaiti newspapers that literally make things up will have their stories reported as if they had any legitimacy.
Frantzman traces the Socotra story to an article in the French Jewish news site JForum but says that the trail goes cold from there:

Reading the JForum post of August 30 leaves it unclear where the information in its report came from. It says: “According to the same Yemeni sources, who provided the information to Syrian sources, Israel and the Emirates are making all logistical preparations to set up intelligence bases to collect information throughout the Gulf of Aden Bay from Bab al-Mandab on the island of Socotra, in southern Yemen, which is under the control of the Emirates.”

However, JForum was not the original source – the information came from the Israeli open-intelligence site Nziv, which has been following the story of clandestine Israeli/UAE coordination on Socotra since 2016, before the UAE’s official takeover, quoting Eritrean sources. In 2016, Israel was very concerned over Sudan smuggling arms to Hamas. The Nziv story notes the topography of the island and how its mountains are an ideal location for electronic intelligence gathering.
The Daily Sabah story takes some leaps from the original reports, saying confidently that any intelligence installations would be a “through -and-through Israeli project” where the UAE wouldn’t even be involved, which seems fanciful. It then contradicts itself and claims that the US is a major player since Socatra might be able to monitor shipping to Pakistan’s Gwandar port that is critical for shipping goods overland to China:

Israel, or in this case the U.S., cannot bear having Gwadar Port develop into a strategic business hub. It is trying its best to create obstacles to hinder the entire project, and what can be concluded from all this is that Socotra will from now on neither be for the Houthi rebels, nor for the UAE or Yemen, but under the complete control of Tel Aviv and Washington. This rapidly changing scenario is altering the world’s balance of power as never before and Israeli – and U.S. – radars will soon be in the most strategic places in the region.

Frantzman is clearly correct that one cannot trust the reporting of dodgy sources like Daily Sabah when nation-states use the media for their own agendas. However, the main story that Israel and the UAE are cooperating on intelligence in Socatra has a little more fire behind the smoke – it makes strategic sense, it makes political sense, it fits well in with both the UAE’s and Israel’s interests in countering the Houthis at the very least, and the UAE would want advanced Israeli equipment rather than rely on its own intelligence capabilities. Plus the Israeli Nziv site is more reliable than either Daily Sabah or JForum.