So much for warming relations between Israel and Arab states. The sports and leisure world remains a bastion of bigotry and boycott against Israeli participants. The latest victim is the diminutive chess whizzkid, Liel Levitan, who was banned from a chess tournament in Tunisia because she is Israeli. Report in The Times of Israel:

Schoolgirl Liel Levitan from Haifa is unable to accept an invitation to play in the World Chess Championship because host nation Tunisia will not allow Israelis to compete, it was reported Thursday. 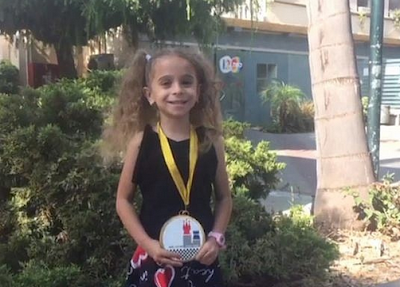 This is not the first time Israeli chess players have been denied the opportunity to participate in international tournaments due to their nationality.

Israeli athletes often face difficulties when competing in the Middle East or against Middle Eastern countries, due to hostility toward the Jewish state.

“Just a few months ago, a World Chess Championship was due to take place in Saudi Arabia,” chess player Lior Aizenberg told Hadashot news. “It was clear to everyone that outstanding Israeli chess players would not be able to participate.”
Aizenberg has instead founded the World Alternative Championship, which takes place in Israel and extends competition invitations to players from across Europe and the Arab world.

Liel has also been invited to compete at the competition, which counts outgoing chairman of the Jewish Agency Natan Sharansky and American pro-Israel group Stand With Us among its supporters.

“The time has come to put an end to discrimination against Israelis in chess, in sports and in every field,” said Aizenberg.

The International Judo Federation on Friday stripped the United Arab Emirates and Tunisia from hosting two international tournaments due to their failure to guarantee equal treatment of Israeli athletes.

The decision to suspend the tournaments came after organizers at last year’s Abu Dhabi Grand Slam refused to acknowledge the nationality of the Israeli athletes — a policy directed only at Israeli participants.