Here is a roundup of some of the Arab media reactions to Holocaust Remembrance Day.

World War II killed nearly 50 million victims, but the Zionist movement speaks only of the Jewish war victims which did not exceed the most inflated and haphazard allegations, 6 million Jews, as they nationalized and monopolized the horrors of war in favor of their [Zionist] project, in an unprecedented Zionist racism toward the rest of the world.

Some of the recent Arab official statements that came out in solidarity with the so-called Holocaust without mentioning one word about the occupation of Palestine, do not represent or express Arab peoples, but rather are part of the wave of criminal normalization that struck the region in the recent period, led by the kingdoms and emirates of the Gulf.


Remembering the Holocaust: and fighting anti-Semitism, we must not forget the tragedy of the Palestinian people that it is exposed to on a daily basis and the massacres that take place in the Gaza Strip by the Israeli army, expelling the Palestinians from their properties and settling the herds of settlers in their place.

The writer understands European attitudes towards this human tragedy of the Holocaust, but I cannot understand the position of some Arab countries on this tragedy, they have nothing to do with it, and they did not participate in it and they are not historically required to profess this issue.
Seventy years ago “Jews” in Israel usurped Palestine with a European-American conspiracy and that it was planted in the heart of the Arab and Islamic world in order to be a hindrance to its unity and geographical contiguity.
I do not want to remind you of the words of the Almighty in Surat Al – Baqarah verse 120 “And never will the Jews or the Christians approve of you until you follow their religion. Say, ‘Indeed, the guidance of Allah is the [only] guidance.’ ” Why do you scramble towards the tombs of the Jews, victims of European Nazism, to pray for their lives and weep for them?


What we remember in this regard are American and European books (including by Jews) that question the Jewish narration of the event and turn it into an industr as well! The Occupying Power is authorized to exercise the role of executioner without accountability; rather, with blessing, acquittal, or participation under the pretext of honoring the victim. This industry also allows some of the ancestors of the Holocaust contemporaries to be acquitted for their collusion with the very Nazi parties that organized concentration and extermination camps.


British historian David Irving says, “There is no documentation regarding the gas chambers,” as Jews reported, and Irving was not the only historian to discover this fact. There are a large number of historians and researchers who do not acknowledge these lies. The myth of the Holocaust and the Nazi gas chamber is the French researcher Paul Rassinier, as well as the French writer Louis-Ferdinand Céline who was mocking the gas chambers allegedly using the expression “magical gas chambers.” 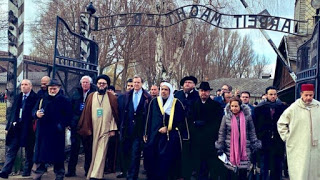 There was also anger at the visit to Auschwitz by the secretary general of the Muslim World League, Mohammad bin Abdulkarim Al-Issa, along with a delegation of 62 Muslims. British Muslim and pro-Iranian site 5Pillars emphasized that al-Issa was invited by the American Jewish Committee which supports Israel.

However, the article did quote al-Issa as saying, “To be here, among the children of Holocaust survivors and members of the Jewish and Islamic communities, is both a sacred duty and a profound honour. The unconscionable crimes to which we bear witness today are truly crimes against humanity. That is to say, a violation of us all, an affront to all of God’s children…. [those around the world who engage in Holocaust denial are] partners in the crime. They are like Nazis themselves.”