Joseph Massad, in an interview on RT, claimed (4:14) “Remember there’s always been a distinction between  Zionism, Jewishness and Judaism and the Israeli government has sought since the 1950s to collapse all these terms and all these references into one … we see this beginning in the 1970s as an explicit strategy at the time spearheaded by the Israeli politician Abba Eban who was a foreign minister and before that the United Nations representative of Israel who insisted and gave a speech in the early 70s insisting that in fact we must equate Zionism with Jewishness and Jews and that any opposition to Zionism should be cast in the frame of anti-semitism.”

I could not find any such speech from Abba Eban, and it is possible that Massad is referring to this 1975 New York Times article that Eban wrote right before the infamous UN resolution equating Zionism with racism. Eban’s words are not a “strategy” but a statement of fact. 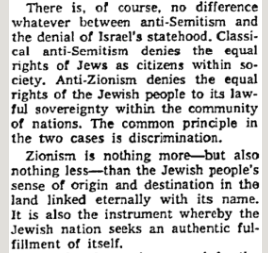 When I posted this nice quote, a tweeter named Aaron Shakow tried to counter it with a personal story:

Let me put it this way: the anti-Zionism-is-antisemitism formulation describes the Jewish identity of tens of thousands of Jews as illegitimate. My great-great grandfather was one. He was chief rabbi of Boston. He opposed Zionism until the day he died. He was even challenged to a duel by Chaim Weitzmann, whose friends apologized profusely. The only universe where all Jews are Zionists is where nationalists mute everyone with contrary opinions. Which is what Eban was trying to do here.

I’m fairly sure the great-great grandfather he is referring to was R’ Gavriel Zev Margolis, who was indeed an anti-Zionist. (The Weizmann story sounds nebulous.)
We’ve seen this argument made before – that a significant number of Jews before 1948 were anti-Zionist so it is absurd to say that they were all antisemitic.
Columbia University professor Joseph Massad made this same argument in a TV interview for the RT propaganda site on Holocaust Remembrance Day as well.

The people making this argument are being disingenuous.

Before 1948, there was a fierce debate in Jewish circles about whether a Jewish state was good for the Jews. Both religious and non-religious Jews weighed in. There were significant fears about whether such a state would increase antisemitism, whether Western nations would expel their Jews for the Jewish state (no one argued in those days that Jews were not a nation,) as well as religious objections to creating a Jewish political entity before the Messiah comes.

But all of that changed when Israel became a reality. Jewish anti-Zionism became a fringe movement immediately. Only antisemites argued that the existing Jewish state must be dismantled or destroyed.

This 1968 story from a biography of the anti-Zionist Satmar Rebbe illustrates how even the religious Jews who were against the idea of Israel understood that anti-Zionism that was not from a religious Jewish perspective was bigotry:


When Hubert Humphrey was running for president in 1968, he came to speak with the Rebbe. The Rebbe noticed the chassidim whispering to Humphrey, and after the meeting he asked them what they had been saying. They said that they had warned Humphrey prior to the meeting that the Rebbe strongly opposed the State of Israel, and therefore Humphrey should avoid that subject. Humphrey had then asked if he could at least tell the chassidim about his support for the state, and they had laughed. The Rebbe said, “Had he spoken to me in support of the state, it wouldn’t have bothered me in the least. We Jews have a Torah which forbids us to have a state during exile, and therefore we cannot ask the Americans to support the state. But a non-Jew has no Torah, and by supporting the state he feels he is helping Jews. And on the contrary, if an American non-Jew is against the Zionist state, it shows he is an anti-Semite.” (h/t @yesh222)

Even the most prominent Jewish anti-Zionist understands that when non-Jews and non-religious Jews oppose Israel, they are simply antisemites.

The State of Israel exists. Anti-Zionists today are not arguing the theoretical pros and cons of a Jewish state as Jews did before 1948 – they are saying that they want the existing Jewish state to be destroyed. They want there to be no safe haven for Jews under persecution. They want, ultimately,. for Jews to be ethnically cleansed from the Middle East, under the pretense of “democracy.” (Funny how no one fights for a democratic Arab state in the region besides a bi-national Palestinian one where Arabs can outvote Jews.)

In short, before 1948 most Jewish anti-Zionists were of course not antisemitic. But after 1948, anti-Zionists who are against the very existence of a Jewish state are people who hate Jews having any national rights. Ultimately, they support a Palestinian state from the river to the sea that will treat its Jews as every other Arab nation did since 1948 – as second-class citizens at best, as candidates for oppression, pogroms and expulsion at worst.