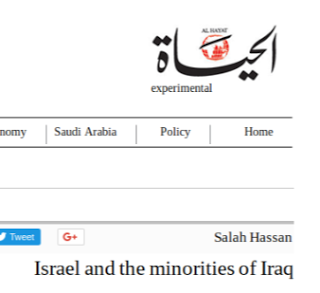 An op-ed in Al Hayat says that Israel’s support for persecuted minorities in the Muslim world is really the Jews’ attempts to destroy Arab and Muslim unity.

You can’t make this stuff up.

Salah Hassan writes that Israel has been wooing religious and ethnic minorities in Arab countries, under the pretext of protecting them from persecution by Muslims. He concentrates on how Israel is destroying Iraq by supporting minority population there.

It started with Israel bringing Iraqi Jews to Israel in the 1950s. Then Israel went after the Baha’i, who were concentrated (and persecuted) in Iran and Baghdad, and who now are based out of Haifa.

Israel has been cultivating relationships with the Kurds for decades as well.

The final straw, apparently, was the Israeli Knesset hosting Nadia Murad, the Yazidi survivor of ISIS atrocities, last month. Once again the Jews are trying to fragment the Arab world by turning the Yazidis against the Muslims who are raping and beheading them.

Hassan is also concerned over some Jews who are making noises to save the minority Mandeans in Iraq.

This is all, we read, “part of [Israel’s]  work on the permanent fragmentation of the Arab countries. This is to complete the work of Daesh [ISIL}”

Of course, the idea that Arabs and Muslims just have to treat their minority groups as human beings is not part of the discussion.