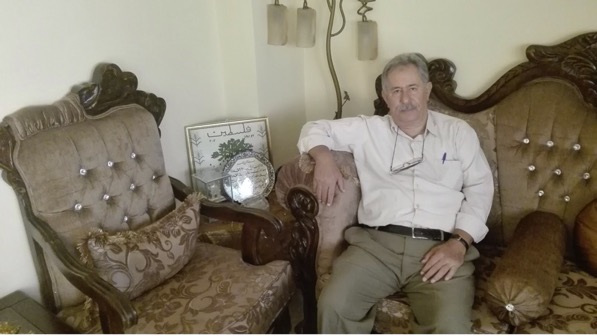 Assad al-Azzouni is an award-winning Arab novelist and writer.

His latest screed is about how Jews are behind the coronavirus, and much more.

The Corona virus can only be a product of the hatred of Jews throughout the world, and that its spread in America comes to confirm this, and it becomes an electoral weapon in the hands of Trump in the upcoming elections, to ensure his second term as a reward to him for what he presented to the Israeli Khazary Zionist Talmudic terrorists, the foremost among them is the deal of the century, Jerusalem, the Golan and the settlements.

When the Jews ignited the fire of the First World War, they reaped the Balfour Declaration, and when they set the fire of the Second War, they reaped behind them the establishment of the Khazars in Palestine, and they want to ignite the third war to announce the establishment of the Great Talmudic Kingdom of Israel, and here we live in the atmosphere of the third war, where the military and political horizons regarding regional and internal conflicts, and the recession that is deepening day by day due to the high price and political stalemate.

Not long ago, Jews tried to ignite the war between Iran and America by creating severe tension in the Gulf. In one of its forms, the Hajj Qassem Soleimani, the head of the Iranian Revolutionary Guards, was killed. This was preceded by some skirmishes that almost ignited the third war, but the rationality of decision makers in Iran and America prevented it.

After this failure, the Israeli Mossad, in cooperation with the CIA, sent Coronavirus to China… Corona was the curtain that Jews used to achieve their goals and pressure the international community to turn a blind eye to their human crimes, implement the deal of the century as a whole and perhaps get some more because Shylock did not die, they urgently need media silence in order to exercise their duties in the manner that satisfies them, especially since the Israeli and American public announced their rejection of the deal of the century, and the fact that after that the coronavirus became the global “trend”, in the media and social media, and I expect that they used the American secret runaway project who became partners in it after its completion, and it is used to control the weather and the general mood, and therefore I do not rule out that they used it on the subject of corona ………., and despite Corona we also expect to detonate the fuse of the Third World War.

This guy is interviewed regularly on TV.