These two stories show how large parts of the feminist movement has completely lost the plot. From January 20:


Palestinian-American groups have pulled out of Saturday’s Women’s March Los Angeles over the inclusion of actress Scarlett Johansson as a guest speaker, in protest of what they call Johansson’s support of Israeli settlements in the West Bank.

Other groups endorsing the petition included Jewish Voice for Peace LA, and Al-Awda: The Palestine Right to Return Coalition.

Other groups that boycotted the event include the socialist International Action Center and Workers World Party.

Since then, this happened in Gaza: 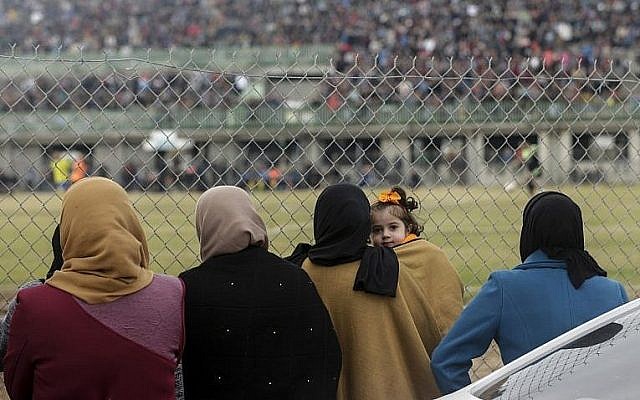 NUSEIRAT, Palestinian Territories: Police blocked dozens of women from attending a football match Sunday in the Gaza Strip, in what activists said they hoped would have been the first such permission under Hamas’s rule.
Authorities in the Palestinian enclave run by the Hamas movement told the women they had orders not to allow them into the stadium at Nuseirat refugee camp south of Gaza City.
Some of the women instead watched the match between Al-Nuseirat and Al-Jalaa by standing outside the fence, an AFP journalist reported.
“We came here to encourage the team and youths in Nuseirat and watch the game, but we were surprised by the presence of Hamas security guards who closed the gates in our faces and did not allow us to go inside to cheer,” Ayat Othman, one of the women who tried to attend, told AFP.
They were to be seated separately from men in the stadium.

No one – and I mean no one – in the West protests Hamas discrimination against women. I had not even seen this reported before this AFP report – hundreds of reporters in Gaza never thought that this was a story worth covering over the years.

But as these “liberals” give Hamas and Islamist countries a pass so-called “feminists” protest Scarlett Johansson.

Who actually is a feminist.