But first, a not irrelevant archival find by University of Aberystwyth international politics academic Dr James Vaughan, regarding Labour Party policy in not-so-far-off days of yore: 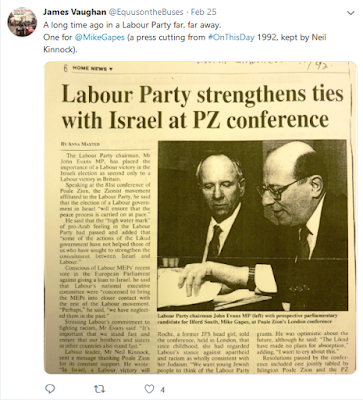 Okay, then, this letter by as-a-Jew leftists to the Guardian, 21 February:

“You report (19 February) that a number of implacably anti-Corbyn MPs have left the Labour party alleging a failed “approach to dealing with antisemitism”, with Luciana Berger criticising Labour for becoming “sickeningly institutionally racist”.

We are Jewish members and supporters of the Labour party concerned about the current rise of reactionary ideologies, including antisemitism, in Britain and elsewhere across Europe.

We note the worrying growth of populist rightwing parties, encouraging racism, Islamophobia and antisemitism. In Britain the far right is whipping up these prejudices, a threat that requires a resolute and energetic response. But instead we have seen a disproportionate focus on antisemitism on the left, which is abhorrent but relatively rare.

We believe that the Labour party under the progressive leadership of Jeremy Corbyn is a crucial ally in the fight against bigotry and reaction. His lifetime record of campaigning for equality and human rights, including consistent support for initiatives against antisemitism, is formidable. His involvement strengthens this struggle.

Labour governments introduced both the anti-racist and human rights legislation of the 20th century and the 2010 Equalities Act. A Labour government led by Jeremy Corbyn will be a powerful force to fight against racism, Islamophobia and antisemitism.

It is in this context that we welcome the Labour party’s endorsement of freedom of expression on Israel and on the rights of Palestinians. Labour is correct to recognise that while prejudice against Jewish people is deplorable, criticism of Israel’s government and policies can and must be made.
We urge all who wish to see an end to bigotry and racism, and who seek a more just society, to give their support to the Labour party.”

A riposte in the Guardian, 25 February: 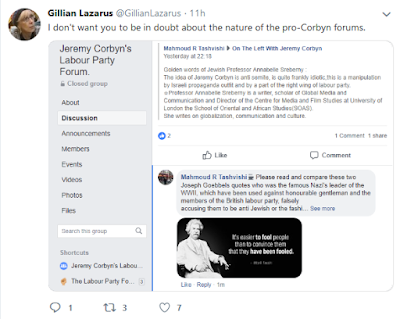 ‘We write in response to the letter you published on 21 February, asserting that Jeremy Corbyn was a crucial ally in the fight against bigotry and reaction and that a Labour government would be a powerful force against antisemitism.

The signatories to that letter plainly feel the need to rely on their Judaism to bolster its content. This may be because they consider it to be some protection from the view that many of your readers would otherwise take when reading their assertions, but it is essentially irrelevant. The vast majority of the UK Jewish community has made its view of Mr Corbyn clear. So too has the public in various opinion polls. He is not trusted on antisemitism, first because he has not acted against it and because his own actions are, at least, concerning. Second, because those claiming to speak about antisemitism in his name do so without reproach or disassociation.

The Labour party has, previously, been a force for good in promoting anti-racism, as the authors acknowledge. Sadly, that is no longer the case. It has never been the case, anywhere, that a party which could not root out antisemitism from its midst, tolerated those accusing Jews of manufacturing it, and lost the trust of the Jewish community, ever governed fairly, decently or competently. Antisemitism is corruption, and corruption spreads.

We also disagree with the authors’ apparent belief that the ability to criticise Israel is critical to the debate on antisemitism. The Labour party’s adoption of the IHRA definition marks its acceptance of the fact that criticism of Israel must not involve antisemitism, and that there is a wide range of acceptable criticism that does not. The discredited argument that antisemitism is invented by Jews to protect Israel is antisemitic. So is criticism of Israel outside the IHRA guidelines and definition. Both of these things should be outwith the scope of mainstream, tolerant debate.

Suggesting a permissible link between the Labour leadership’s attitude to British Jews and Israel is both wrong and shameful. There is no basis to refuse to reproach or reject the antisemites we refer to above. The leadership’s failure to do so makes Jews part of the “few”, who the Labour party expressly reject.

That Labour is so mistrusted on the issue is uncomfortable and sad. But it must be said. And in saying it, we do not speak as Jews, but as citizens of this country. Antisemitism is not a Jewish problem. It is a problem for Jews.’