Hizb ut-Tahrir is an extreme Islamist organization, banned in many countries, that works towards creating a single Islamic caliphate.

But sometimes the extremists see things more clearly than the rest of the world.

This article in one of their online news sites describes how terribly the Lebanese are treating their Palestinian “guests.” 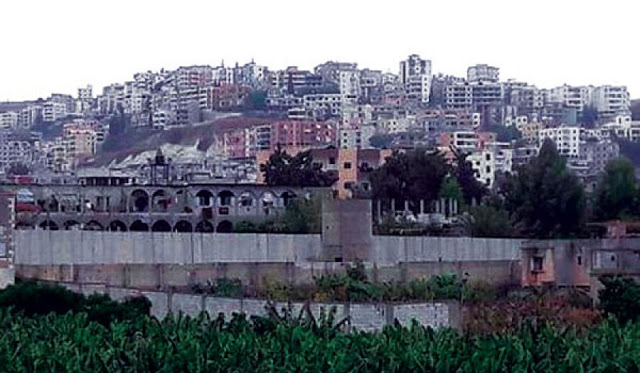 The Lebanese authorities have completed construction of a concrete wall around the largest refugee camps in Lebanon, the Ein El Helweh camp, which is home to 80,000 people near the southern city of Sidon.
The wall was built between 5 and 6 meters high with barbed wire, with high observation towers up to nine meters high and iron gates at the entrances to the camp, despite promises to stop building it, without regard to any voice or opinion of the residents of this camp who were abandoned and suffered as they are separated from their parents and their homes against their will.
The Lebanese authorities, as usual, did not deal with the conditions of the Palestinians except in terms of security at a time when they neglected to address the humanitarian and economic issues faced by Palestine refugees in Lebanon. This wall was established in coordination with the Palestinian factions and the popular committees in the camp, under the pretext of maintaining security and combating terrorism, which has become a stain on any gathering of Muslims on this land as terrorist spots.
The Palestinian families in this camp are now in a large prison in the presence of towers, barbed wire, and other barriers that are usually used in prisons, which gives them an additional burden and a sense of being imprisoned inside their homes; they can only look at the sky.

With the intensification of the political and security crisis in the country, and the absence of any legal status for the presence of tens of thousands of Palestinians in Lebanon, the Palestinian camps are the most prominent humanitarian issue with all the painful humanitarian details. They live in miserable humanitarian and economic conditions, These refugees are still subject to a discriminatory law that was implemented in 2001, which prevents them from the right to own property and to register their property legally, with difficulty in their access to the labor market and preventing them from working in 25 professions, incuding professions that require union membership, as well as tight to allow the expansion of the camps or the entry of building materials into them.

…
These restrictions and unfair measures by the Lebanese state as a “host country”, as well as UNRWA’s restrictive services measures, have exacerbated the situation of Palestine refugees in Lebanon and those displaced from Syria which increased their daily suffering.

The people of Palestine and the refugees have been the fuel of this conflict for the last decades and are still paying their blood and lives for the liberation of their land. They live in oppression and suffering in the country of asylum in the hope of realizing the right of return.

It is not the security and military dealings that are dealt with by the guests. It is their duty to honor them not to oppress them and imprison them between the separation wall, which is similar to the apartheid wall that was established by the Jewish entity, as you brandish a sword to terrorize the camp and its people. Will you take responsibility for the inhuman situation you imposed?

The article throws in some bizarre political theories, blaming the Lebanese abandonment of their Palestinian “guests” on Western and Jewish power, but it is nearly impossible to find any articles in Arabic media that actually mention the institutional apartheid system that Lebanon has against Palestinians.  Too bad no one who matter will read Hizb ut-Tahrir news, and the Palestinians of Lebanon will remain to be treated as cannon fodder.