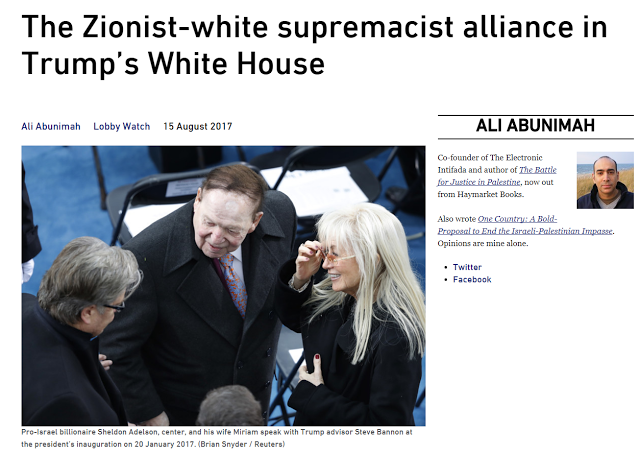 If you want to see the sickness of the anti-Israel crowd, you cannot get a better example that Ali Abunimah in Electronic Intifada.

A much-discussed article in The New York Times about pressure on President Donald Trump to fire his advisor Steve Bannon contains this intriguing sentence:

Mr. Bannon’s ability to hang on as Mr. Trump’s in-house populist is in part because of his connections to a handful of ultrarich political patrons, including Sheldon G. Adelson, the pro-Israel casino magnate who is based in Las Vegas.

As executive chairman of Breitbart News before joining the Trump campaign, Bannon transformed the right-wing outlet into what he described as the “the platform for the alt-right” – the collection of neo-Nazis, white supremacists and racists who have been the renewed focus of outrage since their violent rally in Charlottesville, Virginia, on Saturday.

Bannon is widely viewed as the champion of the white supremacists – some of whom were openly parading with Nazi flags – and the reason why Trump did not explicitly condemn them immediately after one of their number, allegedly James Alex Fields, 20, rammed his car into counterdemonstrators killing 32-year-old Heather Heyer and injuring more than a dozen others.

Hence the renewed pressure on Trump to fire Bannon. But if Bannon supports the white supremacist and clearly anti-Semitic far-right, why does he enjoy the backing of Adelson?

Abunimah pretends to answer the question with his usual modus operandi of finding tenuous connections between Israel and Nazis, going back to the Ha’avara agreement that Jew-haters like Abunimah love to lie about.

Here’s an example of what Abunimah considers logic in his bizarre attempts to tie Israel with antisemites:

Notably, Richard Spencer, the neo-Nazi ideologue who wants to create an Aryan homeland in North America, has called his mission a “sort of white Zionism.”

An antisemite calls his racist movement “white Zionism” so Abunimah uses that as a way to tie Israel to neo-Nazis!  We’ve seen this type of logical fallacy from Abunimah hundreds of times, and in fact his gang has done it to me too, pretending that I support mass murderer and psychopath Anders Breivik by taking something I said out of context and running with it.

If you find Abunimah’s tenuous proofs by association credible, then it is a lot easier to find that he is the real Nazi. Stormfront, the very neo-Nazi organization that he claims to be against which has now been banned from being hosted by Internet providers, loves to quote Abunimah. He provides lots of material for Jew-haters, who appreciate his non-stop efforts to attack Jews who happen to support Jewish nationalism. By his own logic, Abunimah is a Nazi sympathizer.

The real answer to the question of why Adelson seems to support Bannon, though, is the simplest one: Bannon is not an antisemite in any way, shape or form.

Adelson does not only fund Zionist causes. He also gives millions each year to Yad Vashem for Holocaust education and to Jewish education. To tie him to neo-Nazis, as Abunimah tries to, is the height of absurdity.

Yes, Israel – like every country – sometimes allies itself with causes that are not 100% in concert with its own. So does the US, the UK, the EU and Saudi Arabia. That is politics. It is not evidence, as Abunimah loves to pretend, that Israel loves antisemites.

But Abunimah is trying very hard to distance himself from his own clear antisemitism. He has no problem with Arabs murdering Israeli Jews but he wants to pretend that his hate of the Jewish state is a liberal position, not a bigoted one. So the man who names his entire website after a Palestinian initiative to murder Jews in pizza shops and public buses tries to reinvent himself as a defender of Jews, which means we see him jump through hoops to pretend to be against all bigotry.

Sorry, Ali. We know what you really are. You aren’t convincing anyone outside of your own fevered circle of bigots that Israel hates Jews.

And this article prove that you are the antisemite. After all, the tag you used in this very article is “Lobby Watch,” showing that you believe that the “Jewish lobby” (oh, sorry, “Zionist Lobby”) controls America.  It doesn’t get much more antisemitic than that.
(h/t YMedad)