It has been said that Jewish Voice for Peace is neither representative of Jews, nor is it pro-Peace. Its voice on the far left edge of the US Jewish community has been rather shrill since the organisation was founded in 1996.
.
Now, however, with the publication of its Jews of the Middle East worksheet and its document Our approach to Middle East Peace, JVP is employing a new tactic: to co-opt Mizrahi Jews into its anti-Zionist struggle.

Drawing on the revisionism of the academics Zvi Ben-Dror Benite, Yehouda Shenhav and Ella Shohat,  JVP begins by falsifying the history of Middle Eastern and North African Jews. We are not told that these Jews were settled in the region since Biblical times, predating Islam by 1,000 years, lest the impression be shattered that Jews are other than white ‘colonial settlers’. JVP begins its history lesson with the Ottomans. Jews paid a poll tax so that  the Ottoman empire might protect them, and violence against them was ‘unusual’.

Two falsehoods in one sentence. The dhimmi system was a Mafia-style protection racket built on extortion and humiliation : Jews  were granted few rights. Pre-1948 massacres against the Jews were not unusual.

If Zionism was a European movement, so was Arab nationalism. In fact the latter was predicated on a myth:  that a common language was enough to glue disparate tribes together.  Arab nationalism turned out to be a dismal failure –  a recipe for tyranny and internecine conflict, while Israel, despite never knowing a minute of peace,  has been an outstanding success.

While Mizrahim were not, by and large, fans of the modern secular Zionist movement,  fledgling Zionist groups were established in Arab countries. Jews in Iraq turned to underground Zionism  in large numbers after the trauma of the 1941 Farhud massacre, although the Jewish leadership in Arab countries was anxious to disassociate itself from Zionism for reasons of self-preservation. Mizrahim had always been spiritual Zionists, and this explains the messianism that guided pious Jews fleeing Yemen and the Maghreb to Israel.

But JVP downplays the ‘push’ factors of persecution and violence which drove these ancient Jewish communities to extinction. ‘It’s complicated,’ it implies. ‘Jews left for a variety of reasons’. Yet barely 4,000 remain out of one million. No ethnic cleansing there, according to JVP.  The real victims, it believes,  were the Palestinians who still number over a million in Israel itself, after a war started by their own leadership. 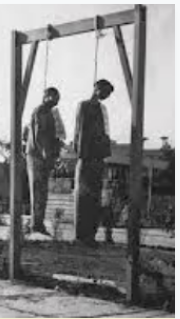 Jews hanged in Baghdad in 1969: even non-Zionists were victimised  in the end

What JVP does not grasp is that even non-Zionist Jews who refused to move to Israel were victimised in the end. This month we commemorate the 50th anniversary of the brutal hangings of nine Jews in Baghdad’s liberation square on trumped-up spying charges, and the disappearance of scores more. These Jews had had no contact with Israel for 20 years.

Muslims resented the European colonials for overturning the traditional hierarchy, which had Muslims at the top and women, non-Muslims and slaves at the bottom.

JVP abhors Jewish power. When JVP talks about ‘peace’ it means submission.  JVP is proposing nothing less than a return to ‘dhimmi’ status in a majority-Arab state. It would do well to learn from the Mizrahi experience.