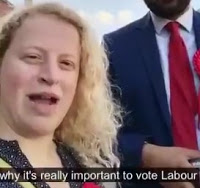 Sheffield, Yorkshire.  Famous, once upon a time, for manufacturing cutlery.  Not so famous for being the home town of the BBC’s appalling little Israel-bashing squirt Jon Donnison.

Olivia Blake (pictured left, and below holding a Palestinian flag) is Labour councillor for the Walkley, Netherthorpe and Upperthorpe wards in Sheffield.

She’s deputy leader of Sheffield Council and Labour’s candidate for the parliamentary seat of Sheffield Hallam.

She’s on record as saying “I fully support the work of Jeremy Corbyn … to rid our party of antisemitism….”

(Yes, you read that correctly!)

But along with the rest of the Labour-dominated city council she evidently thinks that the council has a mandate over and beyond its obligation to keep roads free of potholes, to ensure rubbish is collected on time, and to collect rates. 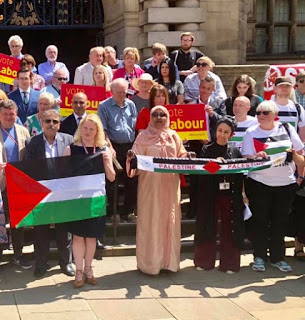 As outlined here (with a photo, different from the one above, showing Olivia raising the flag) Sheffield Council’s recognition of “Palestine” as a sovereign state


came after Sheffield Labor Friends of Palestine gathered nearly 20,000 signatures on a petition calling on the city council to recognize Palestine.

Labor Friends of Palestine, who supported this move, said they will pass on this decision to the British Parliament to discuss it in September.

Palestine’s ambassador to the United Kingdom, Hussam Zomlot, welcomed the move and praised the Sheffield Labor Friends of Palestine for their efforts to get their city to recognize Palestine and raise its flag.

He said this support is not only symbolic, but rather is a step toward British recognition of Palestine, which he said is long overdue and a duty for Britain which participated in the tragedy of the Palestinian people with the infamous Balfour Declaration of 1917 that promised a homeland for the Jews in Palestine totally disregarding its indigenous Palestinian population.

Julie Pearn, of the Sheffield Labor Friends of Palestine, played a big role in winning this recognition. “The time for recognition is long overdue. The state of Palestine is already recognized by 138 other nations,” she said two weeks ago at a rally outside Sheffield Town Hall.

“We believe public recognition of the Palestine state by the council would be a powerful and influential statement of solidarity which we hope other councils will envy.”

Council[l]or Olivia Blake, deputy leader, also said then that “Sheffield is just one city but we can make this symbolic gesture and hope to put pressure on government to do likewise.”

Meanwhile, further mischief is afoot, on the part of the British Trade Union Movement, with which Corbyn and the Corbynistas are of course hand-in-glove.

This conference will feature Palestinian and UK speakers, and provide the space to explore new avenues and provide tools for trade unionists to further our solidarity work for Palestine.

Featured sessions include the situation of Palestinian workers under occupation, how to take BDS action, how we can make a stronger case for Palestinian rights, and the ways we can build on the existing solidarity work by Trade Unions in the UK.

This conference is designed for trade unionists who want to further their solidarity work, to make further progress for Palestine in their unions and beyond.

Join us to skill up, to learn from each other, to hear from inspiring speakers, to attend seminars and to build the power of Palestine solidarity across the UK trade union movement. [Emphasis added]