Katherine Franke, a law professor at Columbia who previously falsely retweeted the claim that the US recognizing Jerusalem as Israel’s capital would be illegal under international law, wrote an op-ed in the Boston Globe invoking Rosa Parks to justify anti-Israel bigotry:

I recently traveled to Tuskegee, Ala., to meet with civil rights icon Rosa Parks’s lawyer, Fred Gray, and we talked about the role of the Montgomery bus boycott in breaking up racial segregation. “The boycott was the spark that ignited the end of Jim Crow segregation in this country,” he told me. Gray noted that when Rosa Parks refused to surrender her seat to a white man, political boycotts were illegal in Alabama. (Some years after the Montgomery bus boycott, the Supreme Court found bans on political boycotts unconstitutional.)

Given the important role that boycotts have played in virtually every social movement in this country, it is particularly troubling that a committee of the Massachusetts legislature will hold a hearing this week on a bill that aims to punish supporters of political boycotts. The bill would require that anyone who applies for a state contract over $10,000 must sign a pledge that they will not engage in a boycott that targets a person or entity because of their “race, color, creed, religion, sex, national origin, gender identity, or sexual orientation.”

What’s really behind this measure is a desire to punish people or groups that have endorsed a boycott of Israel or of companies that profit from Israel’s denial of Palestinians’ human rights. Israel’s most ardent defenders argue that any criticism of Israel — and particularly the use of a political boycott — is motivated by hatred toward Jews and/or Israelis. Yet this is a gross mischaracterization of the role of boycotts in social movements generally, and in human rights activism in the Middle East specifically. In 2005, Palestinians called for boycotts, sanctions, and divestment as a peaceful measure to pressure the state of Israel to abide by international law and grant Palestinians their fundamental rights.

…Passage of antiboycott legislation here in Massachusetts would betray the legacy of Rosa Parks and the sacrifices made by the supporters of the Montgomery bus boycott who played such a crucial role in ending race-based apartheid in this country.

Besides the false assertion that boycotts of Israel are not motivated by antisemitism (since the Arab boycott before 1948 was explicitly against Jews), Franke is claiming that being against boycotting Israel is a betrayal of Rosa Park’s legacy.

In 1975, Parks – along with other prominent African-Americans – signed a full page ad in the New York Times that was explicitly against the Arab economic boycott of Israel. 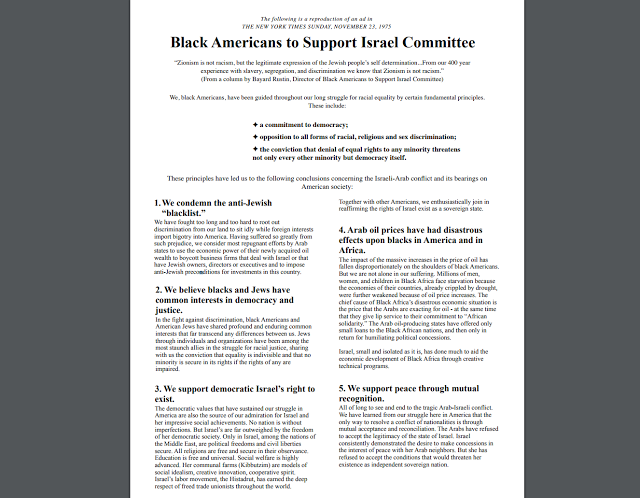 The ad says, among other things:

1.We condemn the anti-Jewish “blacklist.”
We have fought too long and too hard to root out
discrimination from our land to sit idly while foreign interests
import bigotry into America. Having suffered so greatly from
such prejudice, we consider most repugnant efforts by Arab
states to use the economic power of their newly acquired oil
wealth to boycott business firms that deal with Israel or that
have Jewish owners, directors or executives and to impose
anti-Jewish preconditions for investments in this country.
Franke is pretending that a civil rights icon would support discrimination against Israeli Jews today.
No, Professor Franke. It is you who Rosa Parks would condemn. The BDS movement is a direct continuation of the Arab League boycotts of Israel before there was an Israel and the Arab boycotts of the 1970s that prominent American blacks so eloquently exposed as pure bigotry..
(h/t CAMERA)