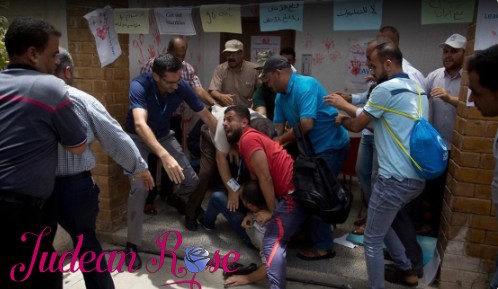 UNRWA recently announced it would fire some 100 Gazan Arab employees due to budget cuts. This resulted in massive protests held Monday, unbeknownst to Jewish Israelis, who were celebrating Simchat Torah, a short distance away. The protests must have been bad, for they struck abject terror in the hearts of all the lovely dedicated European souls who administrate UNRWA from within Gaza. We know this because the Israeli government was forced to step in and evacuate ten of them.

These international UNRWA managers knowingly employ teachers who praise Hitler & preach anti-Semitism & terrorism. I sent @matzschmale our info & he denied everything. Now they are literally running to Israel—from their own Gaza employees—to save their own lives. EU funds this. pic.twitter.com/u27zsbAJ34

The Coordinator of Government Activities in the Territories (COGAT) issued an official statement, confirming the evacuation of UNRWA officials:
“A number of foreign UNRWA employees have been evacuated from the Gaza Strip to Israel. This is due to the tensions as a result of the financial crisis UNRWA is facing and subsequent concern for the safety of its foreign staff.
“The Hamas terrorist organization did not protect the agency’s staff from the violence directed against them,” read the statement from Israeli officials.

Imagine that: 10 senior international UN employees begging to be rescued by the country that body has condemned more times than North Korea, Syria, and Iran combined! And specifically, from the UN agency that provides antisemitic schoolbooks to the children of Gaza, inciting them to violence against Israeli Jews.

And for more info on Matthias Schmale, chief of UNRWA’s international staff in Gaza who are now fleeing to Israel—to save their lives after being threatened by their own Gaza employees—see thread: https://t.co/tUGrsgp3d3 @matzschmale

What are we to make of all this?

The main takeaway seems to be that no matter what you give them, no matter how much land, money, and freedom they have, the Arabs can’t properly run a state of their own. You can analyze the reasons until the cows come home, but the fact remains: given all the tools of statehood, they have failed to create an independent state. Independent, that is, from Israel.
Israel always has to step in and rescue them from themselves. Or alternatively, to rescue the international workers sent to help them. It’s just pathetic.
The 2005 Expulsion of the Jews from Gaza (A/K/A Disengagement) was a chance for the Arabs to show they could build a state, given land, some infrastructure, a budget, and a government. It was a chance for them to show they didn’t need to depend on Israel for aid, jobs, or medical care.  Alas, the Arabs ran true to type, destroying the greenhouses left them by the Jews, using the monies they receive to support pay to slay schemes and swollen government salaries, and as in Judea and Samaria, electing to be governed by terrorists.

Meantime, they protest in the tens of thousands, demanding to be let into Israel, the state they say should not exist, they state they continue to try to destroy, they state they should have no need of, with all that was provided them by Israel and by the world.