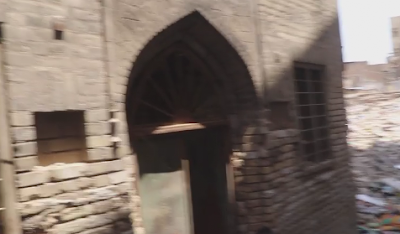 The remains of the tomb of Sheikh Ishaq Gaon in Baghdad

Two young boys guide a visitor to the  site of the tomb of a Jewish  holy  man in Baghdad, the shrine of Shaykh Ishaq Gaon (around 4 mins into the video by Dhikra Sarsam).  The tomb is now a semi-ruin, surrounded by rubble and rubbish.

According to Zvi Yehuda’s book Tombs of Saints and Synagogues in Babylonia, Shaykh Ishaq Gaon was the sarraf, the chief treasurer of the Caliph Ali b Abi Talib. Shaykh Ishaq Gaon died in the year 688 CE and was buried in today’s Hannun neighbourhood inside the old Jewish quarter in Al-Rusafa in east Baghdad. Muslims call him Sheikh Ishaq, Ali’s treasurer.

The burial place of Shaykh Ishaq Gaon also served as a synagogue populated by ‘ten idle men’ supported by the Baghdad Jewish community. The tomb was in Jewish hands until the exodus, when it fell into disrepair.