The shocking and horrendous murder of British Labour MP Jo Cox in her Yorkshire constituency is of course a tragedy and an outrage that has caused widespread revulsion and an outpouring of grief both from those who knew the 41-year-old personally and those who did not.

It goes without saying that all decent people, irrespective of creed and political complexion, deplore the evil that took her life, and sympathise with her friends and family, not least her two small children.

As the Jewish Chronicle reports,


‘Jewish communal leaders have paid tribute to Jo Cox, the Labour MP who was shot and stabbed in a shock attack in her constituency on Thursday afternoon…. 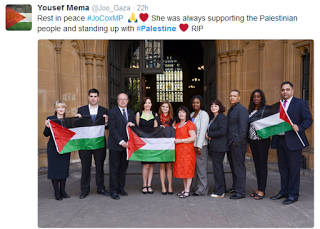 Mrs Cox’s Jewish colleagues expressed sadness at the news. Luciana Berger, the Shadow Minister for Mental Health, tweeted: “Jo Cox was one of the best. A kind, wonderful, passionate, super talented colleague. My deepest condolences to Brendan and the family.”

Paying tribute to her human rights work, Labour MP Ivan Lewis, who is running for Manchester Mayor, tweeted: “Jo Cox changed the world for mums at risk of dying during childbirth and Syrian refugees. We pray for her family and must learn from her humanity.”…. 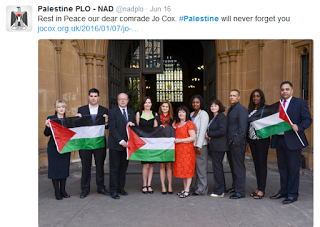 He said he had come across Mr Cox, who worked in international aid and development, on projects looking to bridge relations between Jewish community institutions and NGOs like umbrella group Crisis Action.

Mr Newmark said: “She was a very human politician in every sense. She cared. She cared about issues and people…. 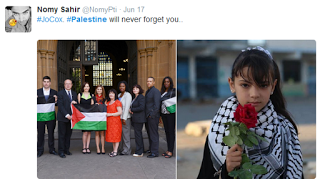 UK Chief Rabbi Ephraim Mirvis paid tribute to Mrs Cox. He said: “We’re united in grief today at the terrible loss of Jo Cox. Brutally murdered as she served constituents. May her memory be for a blessing.”

Jonathan Arkush, president of the Board of Deputies, the representative body of British Jews, said: “We send our condolences and prayers to all of Jo Cox’s family after her senseless and tragic murder.”

The Jewish Leadership Council tweeted: “The JLC is shocked and appalled at the senseless and tragic murder of Jo Cox MP. We send our sincere condolences to her husband and family.”

The Community Security Trust tweeted: “We are shocked and appalled at the attack on Jo Cox MP and our thoughts and prayers are with her and her family.”….

In a vigil after her death, Labour leader Jeremy Corbyn paid tribute to her work as a parliamentarian and human rights activist.

In a statement, Mr Corbyn said: “Jo was dedicated to getting us to live up to our promises to support the developing world and strengthen human rights.”….’


“This is absolutely tragic and dreadful news. My thoughts are with Jo’s husband Brendan, their two children and their wider family. We’ve lost a great star, she was a great campaigning MP with huge compassion and a big heart.”

Ms Cox has been recalled as a great humanitarian whose memory can best be served by embracing the causes that mattered to her and emulating her in her compassion.

Yet it has to be asked: “How compassionate was she towards Israel in its struggle against Palestinian Arab rejectionism and terror?” 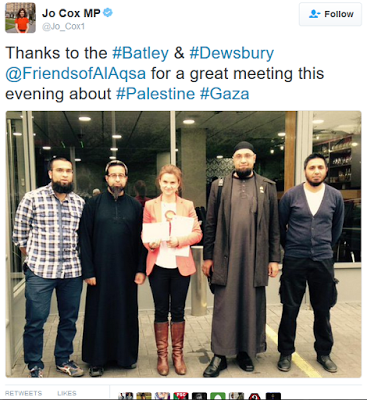 And here’s a current comment on it from someone in Pakistan, from where so many of the late MP’s constituents originate:

As the Jewish Chronicle notes in the above-mentioned report:


“In the course of her career, she called for a resolution to the Israeli-Palestinian conflict and submitted a piece on the issue for Labour Friends of Palestine and the Middle East.

In her ‘Unlocking Gaza’a potential: beyond conflict and crisis’ article, she wrote: “The international community should prioritise efforts to stabilise and extend the current ceasefire, end the blockade to kickstart Gaza’s economy and allow greater freedom of movement both into and from Gaza.”

She called on her party to: “encourage the Israeli government to open up all crossings into and out of Gaza, and urgently allow free and unfettered access to Gaza for goods.”

She also said the Labour Party should “pledge to support a Palestinian national unity government, with Hamas and Fatah ministers, operating in both Gaza and the West Bank,” adding that it should also: “Press for an end to rocket or mortar attacks into Israel. Press for accountability for human rights abuses and violations of international law committed by all sides.”

Ms Cox was sometimes spoken of as a potential Foreign Secretary.  We will of course never know, now, what that would have meant for Israel had she attained that position.

But the tweets I have included on this blog suggest that friends of Israel may well have felt dismayed.