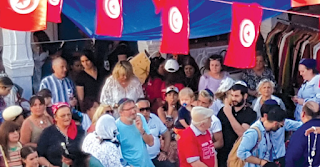 Tunisia likes to project an image of tolerance, yet has lost 99 percent of its Jews. A young Israeli of Tunisian heritage goes in search of his roots, and finds some surprising links with the past. Article by Gidon Uzan in the Jerusalem Post (with thanks: Janet)

My grandfather Yehuda Uzan had been a shop owner. After exploring the neighborhood for over two hours to no avail, another store owner suggested we ask an 86-year-old resident named Misira if he remembered anything about the old Jewish community.

We finally located Misira, who was practically blind, but after some probing recalled my grandfather, explaining that his father had worked in my grandfather’s shop for many years. As he stood on the doorstep of his house, Misira told us how he remembered the moment my grandmother informed him that they’d be leaving Tunisia for Palestine in three months’ time. He excitedly described to us how my grandfather would tear every loaf of bread in half and give half of it to his family. And with tears in his eyes he recalled the day my grandmother put a sizeable amount of cash in his hand so he could get an education. In fact, he did go on to learn to be a silversmith, and was then able to support his family for many good years until he retired.

Our next stop was the local cemetery. The first gravestone we visited was that of Rabbi Yitzhak Chai Tayeb, who died nearly 200 years ago. According to a legend that’s described in an anthology put together by Dr. Michal Sharf, the rabbi once put on worker’s clothing and offered to carry a man’s belongings all the way from the port to a local hotel in Tunis. On the way, the rabbi answered all of the man’s questions with such brilliance that the man wondered if this worker was so clever, imagine how clever the rabbi of such a place must be. Next, we approached the headstone of Rabbi Yaakov Slama, also known as Morid Hageshem, and many other famous rabbis and mystics. For me, as a Jew with Tunisian heritage, hearing all the stories about these holy men and the society they lived in was most gratifying.

During our trip, in addition to visiting Jewish cemeteries, we also toured a number of cities where Jews had lived, each of which had remains of a synagogue. In addition to El Ghriba Synagogue in Djerba, there was another house of prayer there called Beit El. And in the city of Monastir, farther north on the Tunisian coast, there are remnants of the Keter Torah Synagogue, which served an active community in the 19th century. This city also happens to be the birthplace of Habib Bourguiba, Tunisia’s first president, who is greatly revered by Tunisians. And I must say that even though I am not a religious person, I prayed with all my heart and soul each time we entered one of these ancient synagogues in Tunisia. I felt so close to God and my ancestors.