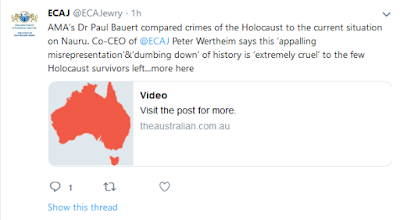 Few remarks regarding the Holocaust can be a frightfully disgusting as those made by a senior Australian doctor, Paul Bauert, comparing the plight of (immigration queue-jumping) “asylum seekers” at present detained offshore, and Jews incarcerated in the Auschwitz death camp.

As reported in The Australian newspaper,


‘The paediatric representative from Australia’s peak medical body has suggested asylum seekers on Manus Island and Nauru are in a worse situation than Jews in Auschwitz because people who knew they were going to be gassed by the Nazis “found some sense of relief in knowing what was happening”. 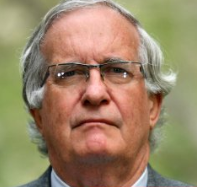 Paul Bauert of the Australian Medical Association [pictured]… said the mental health of detainees in Manus and Nauru had deteriorated because there was no certainty about their future.

“The main reason for the impairment of mental health — as Viktor Frankl the psychiatrist from Auschwitz described very well in his book Man’s Search for Meaning — the main problem that these people have is a lack of meaning, a lack of any end to what is going on, a lack of certainty,” Dr Bauert told Sky News.

“And this more than anything causes severe mental health damage. Even those who finally knew they were about to be condemned to the gas chamber at least found some sense of relief in knowing what was happening.” ….’

He’s been shamed into tweeting an apology of sorts for his foul comparison:


“My comments this morning were intended to reflect the writings of an eminent Jewish psychiatrist who survived Auschwitz. The words I used did not convey the complexity of what he wrote. My deep apologies for causing offence. Auschwitz was a humanitarian disgrace.” 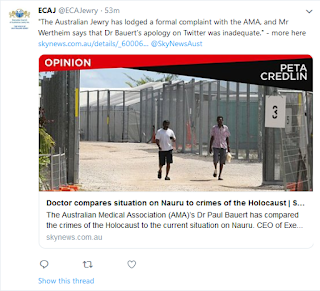 In a Sky News interview with Peta Credlin, Peter Wertheim, joint CEO of the Executive Council of Australian Jewry (ECAJ), has robustly condemned Bauert’s odious remarks, terming them “an offensive dumbing down of history,” “extremely cruel to the few Holocaust survivors we have left”, and “a cruel misrepresentation of what these people actually went through”.

And the ECAJ has not surprisngly and quite justifiably made a formal protest to the Australian Medical Association, terming Bauert’s apology on Twitter “inadequate”.