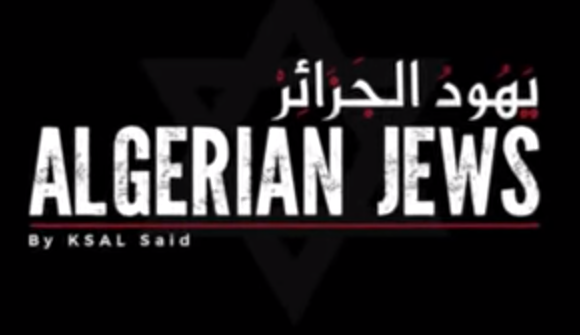 Algerian TV screened a documentary last month about the 2000-year history of Jews in Algeria. The documentary was quite positive towards Jews altogether. You can see the first part, with English subtitles, here.

The film includes a testimony to a Jew named Hussein who talks about his life in Algeria and the difficulties he faces because he is Jewish, although he is an Algerian.

“I am an Algerian like you, I love this country, I am Jewish,” he says. But most remaining Jews in Algeria hide their origins.

There has been quite a backlash by people upset over the pro-Jewish documentary.

Al Quds, the UK-based pan-Arab news site, writes that while a couple of people interviewed liked the film, most others were aghast.

“The film is a dangerous precedent in the Algerian media, in how it has sympathized with a group with a black history in Algeria,” said Mohamed Wali, an Algerian media specialist.

“The Jews met Algeria’s embrace of treachery and stood with the colonizer at the beginning of his occupation of Algeria and the revolution of November 1954,” Wali said.

He stressed that “the crime of treason does not fall under the statute of limitations.”

Algerian journalist Hamza Dabah criticized the documentary, writing in Facebook that  “the promotion of the Jews is a blatant act of glorification which attempted to give them a free halo of sympathy and glorification, and to show them in a state of piety, misery and injustice, without a trace of their own guilt.”

He added that “the purpose of the work is to effect an emotional impact with the Jews, but it tramples on the facts of history and the blatant betrayal, chosen by the Jewish bloc itself, beginning with its great role in the fall of Algeria under the French occupation.”

According to Ben Ajamia Bouabdallah, media officer of the Movement for the Society of Peace (the largest Islamist party in Algeria), “the film is more of a propaganda than a phenomenon or survey of an ethnic or religious component of Algeria.”

“There is no other opinion in the investigation presented, and there is no trace of scientific and historical narratives contrary to the story that was adopted in the video,” he said in a blog post.

“The timing of the broadcast of the tape raises more than a question about a potential Israeli incursion into North African countries, as evidenced by intelligence reports that were published in the Zionist-oriented world press.”

“The timing of the film is on the anniversary of the Land Day and the right of return, which is celebrated by Muslims in general and the Palestinians in particular [is suspicious]. …Perpetual reminders of grievances, issues such as forced displacement and persecution are topics that must be based on evidence of history and require impartiality.”

“Why were they originally hidden? Why did they decide to appear? Is there still justification for concealment? Is their appearance a rebellion? Or is it internal or external? Shouldn’t these questions be investigated? “

Many of the critics praised the technical aspects of the film, but they simply couldn’t stomach anything that was sympathetic to Jews.