Apologies for starting off the new Jewish year with this dose of poison from Al-Jazeera. The writer Susan Abulhawa has a track record for being one of the most virulent purveyors of anti-Jewish extremism. The article features a number of textbook tropes: Israel  is a ‘colonial settler’ enterprise. It needed Jews from Arab countries to populate the state (insert here the familiar ‘Zionists bombed Iraq’ allegation), but preserved an orientalist contempt for their inferior culture (insert here cherry-picked quote by Zionist leader, in this case Jabotinsky). The article condemns Israel for collapsing these cartoonish keffiyeh-wearing, hummus-munching Jews into a single invented ‘Mizrahi’ identity, but this is exactly what Abulhawa does when she calls them ‘Arab Jews’.  (Yet she contradicts herself by claiming there were differences between Tunisian, Moroccan and other Jews. Persian Jews, she claims, spoke Arabic!) Ashkenazi Zionists are uniquely evil because they kidnap Mizrahi babies (insert obligatory link to article by Jonathan Cook). (With thanks: Hadar) 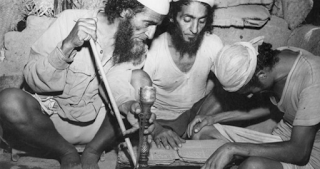 Although it was a project conceived by Europeans and for European Jews, they lacked sufficient numbers to build a population large enough to conquer the indigenous Palestinian population. Thus, recruitment of Jews from the surrounding Arab world was a necessary inconvenience. They did so through propaganda and by creating false flag terror incidents (bombing of synagogues or Jewish centres) in order provoke an exodus of Arab Jews.

A prime example of this happened in Iraq where the oldest Jewish community in the world had lived for millennia as contributing members of Iraqi society, and who prospered, contributed to the arts and the economy, and participated in government. But these Jews were not embraced as brethren by European Zionists. Zionism was decidedly colonial, and that meant that Jews of the Arab world were seen as incomplete, barbaric, dirty, uncivilised. Za’ev Jabotinsky, one of the forefathers of Zionism said, “We Jews have nothing in common with what is called the Orient, thank God. To the extent that our uneducated masses [Arab Jews] have ancient spiritual traditions and laws that call the Orient, they must be weaned away from them, and this is in fact what we are doing in every decent school, what life itself is doing with great success. We are going in Palestine, first for our national convenience, [second] to sweep out thoroughly all traces of Oriental soul.

Before Israel, Jews of Iraq identified as Iraqi, as Egyptian, and of Palestine as Palestinian. They spoke Arabic, ate the same foods as their Christian and Muslim compatriots, celebrated and partook in the same national events and traditions, lived by the same social protocols, and moved through their respective cultures as other natives did. And despite the similarities of their cultures, Tunisians were distinct from Egyptians, who were both distinct from Iraqis, who were distinct from Moroccans, etc. But Israel collapsed them all under a single identity, which was to be distinguished only from Ashkenazis, European Jews, who were higher up on the social order, and, of course, from non-Jewish Palestinians and Arabs, who were to be despised. The level of their resulting self-hate can be measured in the heightened cruelty they practise against Palestinians.