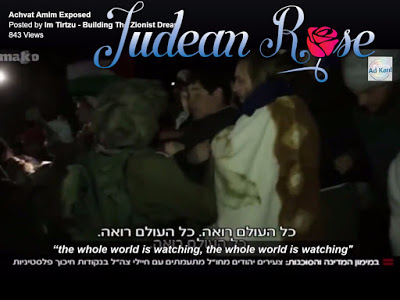 If you were a parent contemplating where to send your child in Israel after high school for a solid Jewish experience, would you send your child to Achvat Amim? The name sounds good, from the little Hebrew you might remember—sounds like the name of a Jewish congregation, a temple. But even if you can’t quite remember what the words mean, the website tells you: Solidarity of the Nations.
Intrigued, you look around the Achvat Amim website and see that one of Achvat Amim’s partners is Masa. Now that’s a name you’ve heard. You go to Google and you find Masa’s about pagewhich states:
“Masa Israel, a public-service organization founded by the Prime Minister’s Office of the Government of Israel, together with The Jewish Agency for Israel, is the leading organization in the long term Israel experience space, and it sets the industry standard.”
Well, you think to yourself, if the Israeli government co-founded Achvat Amim, it must be a good, hearty, Zionist program. You’re pretty much sold, just right on the basis of that. Because you know that everything comes down to money, and you’re pretty sure this means Achvat Amim is receiving funds from the Israeli government. What better endorsement could there be, right?

You might not even bother to look into the other Achvat Amim partners, whose names you’ve never heard of. Because once you see it’s got Israeli funding, you’re just not worried enough to dig further. That means you wouldn’t find out, for instance, that the group receives funding from the Marxist socialist Hashomer Hatzair movement with which Achvat Amim founder, Daniel Roth, is associated. Hashomer Hatzair receives funding from, for instance, the Friedrich Ebert Stiftung, affiliated with the Social DemocraticParty (Sozialdemokratische Partei Deutschlands – SPD). This foundation, according to a report by NGO Monitor, “cooperates closely with local partner organizations to jointly develop projects in the spirit of democracy, gender equality and peaceful co-existence.”
Which is why in December 2011, the director of FES’ Jerusalem office, Michael Broning, co-wrote an article with Ghassan Khatib, director of the Ramallah-based Palestinian Government Media Center, entitled, “What about Israeli Rejection,” a rebuttal to an op-ed by two Israeli government oficials: “The Problem is Palestinian Rejectionism.” The rebuttal argued there is no Arab rejection of peace and that Israel is the intransigent party standing in the way of peace. Certainly a problematic position for a foundation funded by the German government, if you see what I mean.

And since you’re not looking further into Achvat Amim’s credentials, you also wouldn’t bother looking into Rabbis for Human Rights, which receives oodles of funding from all the wrong places, including the George Soros-funded New Israel Fund. RHR, while some of us are fighting for Jewish rights in Israel, fights for Arab rights, always at the expense of Jewish rights, and sees the Arabs as supreme. While numerous examples of this ethos exist, here’s one that is particularly vile, culled from an NGO Monitor report:
“Following the March 2011 Itamar massacre, RHR condemned the murders saying, ‘They were of course a violation of the most basic human right, the right to life,’ but quickly went on to demand that the defense office fulfill its ‘obligation to protect Palestinians.’ The Hebrew website contained a one-sentence condemnation followed by four paragraphs detailing the need to defend Palestinians from ‘settler attacks.’”

Another one of Achvat Amim’s partners is Hand in Hand. NGO Monitor mentions this organization in regard to a past lack of transparency over US funding for Israeli and Arab NGO’s. Hand in Hand schools, attended by Jewish and Arab children, received $1.08m from the US government for the 2012-2015 period, using the money to hold such annual events as “Nakba Day” which translates to “Disaster Day” and is celebrated by Arabs the day after Israel’s Independence Day (which means they’re mourning Israel’s independence/existence/that we whupped their butts). NGO Monitor’s reportstates that “a flyer for a May 14, 2014 event at the Hand in Hand school in Jerusalem, ‘Families Talk about the Nakba,’ features the USAID logo.”
Now imagine little Israeli children being indoctrinated with this sort of false and ugly narrative about their own people. This is an organization partnering with Achvat Amim. Are your older children contemplating this five-month program more or less susceptible to this smear on their own kind, their own nation?

Givat Haviva is another partner of Achvat Amim that received hefty US government funding for a two-year joint project Keshev called “Communicating Peace.” NGO Monitor speaks of a USAID-funded Keshev report accusing the Israeli media of, “ignoring the wider context of the story and Israel’s responsibility for the continuation of the conflict.” In a different USAID-sponsored report on the “Free Gaza Flotilla’s” confrontation with the Israeli Navy, Keshev alleged that “the message that the activists tried to present against the policy of blockade [of Gaza]…remained outside the public discourse in Israel.”
Before we delve further into Achvat Amim, it should be noted that Masa has withdrawn funding from Achvat Amim. Of course, you’d never know this from looking at the Achvat Amim website.

If you were a parent wanting to send your child on a trip to Israel, you might still think it a perfectly viable option, based on what appears to be Masa’s imprimatur.

Why did the Jewish Agency/Masa/the Israeli government decide to withdraw funding from Achvat Amim? Because Israel’s Channel 2 did a huge exposé of the program’s illegal activities, which include, oh, entering a closed Israeli military zone and clashing with IDF soldiers. The closed military zone was the site of an illegal Arab outpost that left-wing orgs keep helping the Arabs rebuild and which the IDF kept dismantling. Like four times. It’s called Sumud.
You can see the whole story of Achvat Amim and the kids fighting with Israeli soldiers here:
Channel 2’s source for the story was Ad Kan, an organization working hard to spread the truth about Israel.
Now losing Masa funding would have to be a big blow to Achvat Amim, since this lost revenue represents $3000 per participant. I wrote to Daniel Roth, director of Achvat Amim to ask him how the withdrawal of funding will affect his program:

I’m writing a piece about Achvat Amim. Can you explain the reason the Israeli government withdrew its funding from your program? How will this affect your program going forward?
What is the cost per participant? Why should a parent send his/her child to your program over others?
I see on your Facebook page a mission statement: Solidarity of Nations – Achvat Amim is a 5 month volunteer experience in Jerusalem that directly engages with the reality of the Israeli-Palestinian conflict, based on the core value of self-determination for all peoples.
Question: where, in the opinion of Achvat Amim, are Jews within their rights to have self-determination, meaning in which territory?

In response, I received an out of office email telling me he’d be in on Monday (Nov 21st). Google told me that Nov 21st was a Monday in 2016.

I sent a private message to the Facebook page and was told that Daniel would respond to me by email. Which he did, with the text of the lie-filled statement put out by Hashomer Hatzair which I had already seen:

It is important to emphasize that none of them took part in any illegal activity, or any instance of civil disobedience or non-compliance with authorities.   Any attempt to assert otherwise is simply incorrect and defamatory.

The safety and security of our participants is our top priority and we take that very seriously.

In light of this situation, we are in active conversation and full cooperation with all of the relevant bodies.