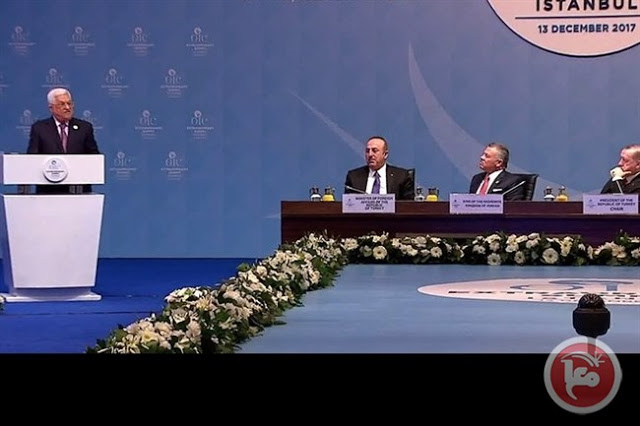 Mahmoud Abbas’ speech at the Organisation of Islamic Cooperation extraordinary conference in Istanbul included the usual bluster and threats that the world accepts as normal discourse from Palestinians.

But one part that he said proves yet again, as if it needed proving, that Palestinian leaders were never interested in peace.

Abbas called upon the countries of the world to re-assess their recognition of the State of Israel “as long as it insists on violating the rules of international law and breaches all international resolutions since its establishment in 1948.”

Yes, he is insisting that the world community gives recognition to the fake state of “Palestine.” But he is simultaneously calling on the world to withdraw recognition of Israel!

And Abbas is pointedly not only talking about “occupation.” He is saying that Israel is illegitimate to begin with, violating international law since it was reborn.

If he wanted peace with Israel he could have it. If he wanted two states side by side, it could have been done at least four times since 2000.
But Palestinians don’t want two states. They are still going by Arafat’s playbook of taking what they can get and then using that to gain the rest of what they teach their children is “Palestine.” (Of course, not the parts of Palestine that lie outside the boundaries of the British Mandate in today’s Jordan and Lebanon and Syria…)
By insisting that Israel itself is illegitimate and always has been, Abbas is saying to his fellow Muslims exactly what he means by “peace.” His insistence on “return” shows that he wants the “two states” to both be Arab, and eventually one Arab state with at best a despised Jewish minority without any rights. He wants to wrench the heart of the Jewish people from them. And he wants the world to make Israel into a pariah nation until it no longer exists.
Yet again, the Palestinian leaders have proven that they are not interested in any real peace with Israel. and yet again, the world community chooses to ignore it, whether out of fear of Muslim violence or out of latent antisemitism or whatever. The truth is too ugly to contemplate so the world insists on accepting with the lies and fictions and fantasies of the Arabs.
As this conference shows, Jerusalem is only an excuse for pushing the world towards the real goal – not to take Jerusalem away from Israel but to take Israel away, period.