I was struck by this short exchange on Twitter between Honest reporting and Frank McDonald, a former editor of the Irish Times: 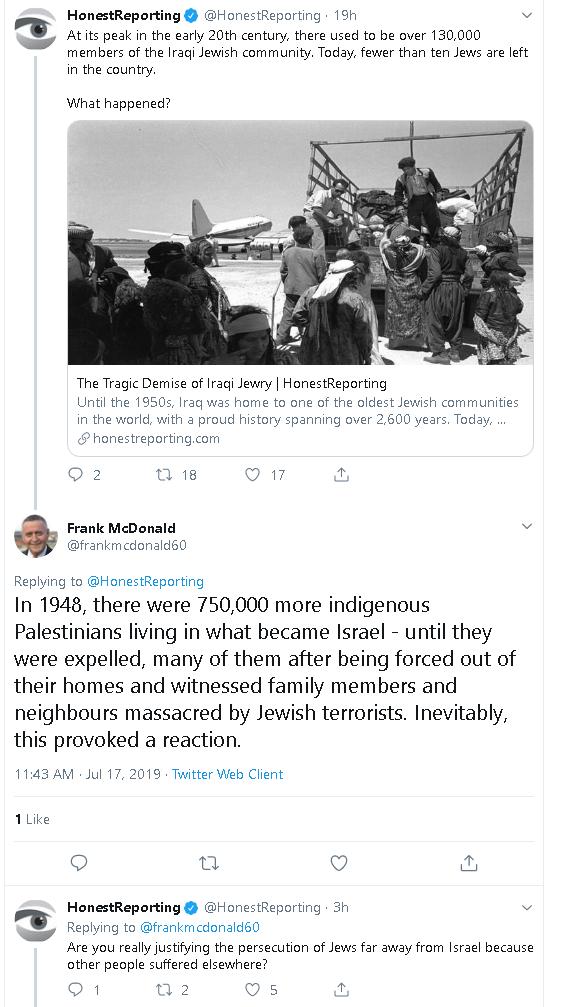 I noted, “A former editor of Irish Times justifies the ethnic cleansing of Jews  from Iraq by saying that Arabs just can’t help themselves. What a racist.”

Frank McDonald
@frankmcdonald60
I never said that, and I’m not a racist in any way. What I wrote is the truth, much as you try to deny it. The fact is that Jews lived quite happily throughout the Middle East until 1948. Their expulsion from Iraq and elsewhere was a reaction to what happened in Palestine.

Elder Of Ziyon ҉
So would Arab Americans have been justified in attacking Jews in America in 1948?  Can YOU attack Jews in Ireland TODAY because of, oh, Gaza or Nakba, or whatever?  You are justifying Arab antisemitism by calling it “inevitable.” Which means you are saying Arabs cannot help it.

Frank McDonald
Not at all. I never suggested that they should. Merely that the expulsion of Jews from Arab countries in the Middle East was a reaction to the Naqba in Palestine and that this was inevitable under the circumstances of the time. That’s all.

Elder Of Ziyon ҉
People attacking Muslims after 9/11 was a reaction – but not “inevitable.” It is only inevitable for bigots.  Did you even bother to read the article? It highlighted the Farhud – the Iraqi pogrom against Jews in 1941. Sort of ruins your thesis of peaceful relations before 1948.

Frank McDonald
I know it was not always a bed of roses for Jewish communities in other countries, and that there were outbreaks of anit-Semitism from time to time. But Israel’s dispossession & expulsion 750,000 indigenous Arabs was so outrageous that it’s not surprising there was a reaction.

Elder Of Ziyon ҉
You are an object lesson in genteel bigotry, and you are completely clueless about it.

Elder Of Ziyon ҉
This thread shows otherwise.  As far as your errors about Israel are  concerned, if you want to be educated, you can read my blog (although we have seen you actually don’t read beyond headlines) or engage with the @irlisrAlliance. Perhaps you can shake your prejudices.

Frank McDonald
I don’t have “prejudices”, but rather seek out & separate the truth from the miasma of mythology. I mentioned earlier that the Israeli military are currently censoring historical records about Jewish terrorist massacres during the Naqba, and hope  you don’t approve of that.

Elder Of Ziyon ҉
I could prove that nearly all you have said about Israel is wrong, but it is a waste of time arguing with someone who has shown little regard for truth here.  For the record I am against the removal of archives from the public, and said so…after verifying the story was true.

Frank McDonald
The latter is good to hear. I’m well up on what really happened in 1948, having read David Hirst’s great book, The Gun & the Olive Branch, before my first visit to Israel/Palestine in 1980, and many others since, including The Ethnic Cleansing of Palestine, by Ilan Pappé.

Elder Of Ziyon ҉
Have you read Benny Morris, and his scathing critiques of Pappe? Or do you only choose to read history that conforms with your prejudices?  I’ll be writing up this exchange, and I’ll add an analogy that has a 0.01% chance of getting through to you.

Frank McDonald
Likewise, I’m sure. You propagate Zionist mythology, in which right is left, black is white, up is down, etc. It is shameful that many Israelis are in the dark about their own history. At least in Ireland, we have a much more rounded view of our past, once we dispelled the myths.

So far, the thread shows a typical anti-Israel bigot who has zero ability to think critically about any accusation against Israel, repeating mantras and clueless about how he ha justified antisemitism (and how his opinion of Iraq’s antisemitism as an inevitable reaction to Zionism mirrors exactly the thinking of Islamic terror groups who always say that their attacks on civilians are a “natural reaction” to whatever Israeli “crime” is the flavor of the week.

But he also commented on my tweet yesterday about the antisemitic statements of Niall Collins: 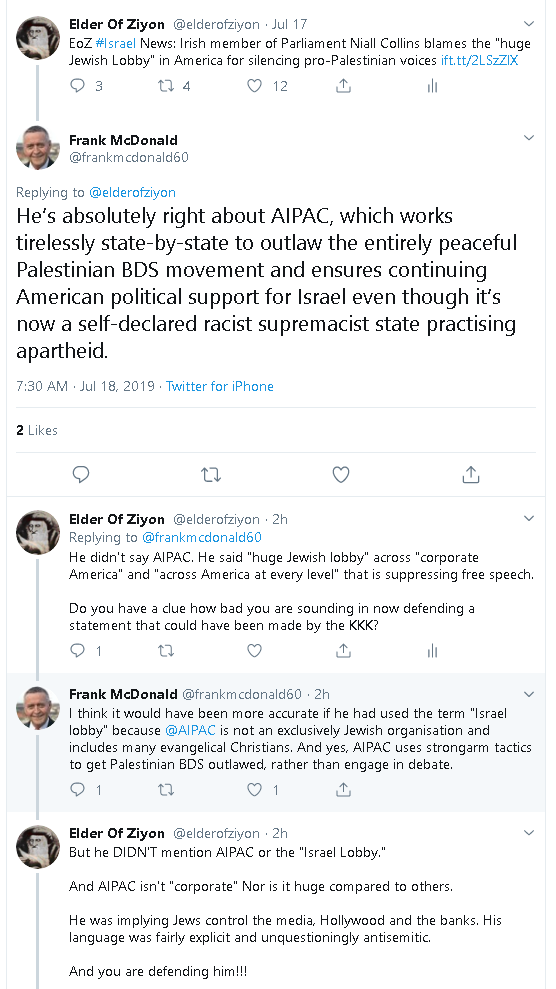 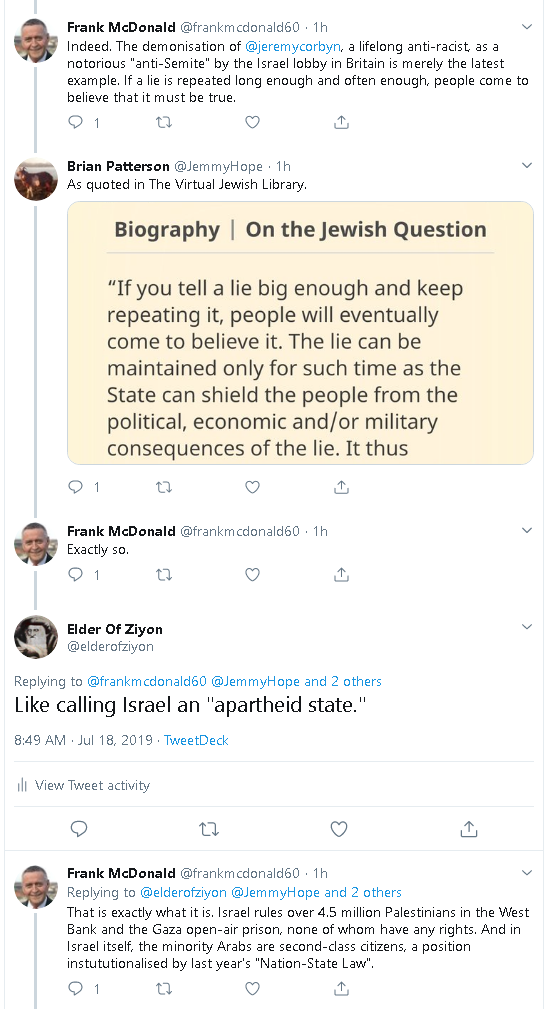 It is generally pointless to try to defend Israel in these sorts of exchanges because the other side will keep repeating the mantras of “apartheid” and “racism” and cherry pick examples, real or imagined. Any other facts are discarded.

Anyway, to this point, I mentioned an analogy to his biased way of looking at Israel that has a tiny chance of getting through to him.

In 2010, this same Frank McDonald was arrested for hitting a woman at a hotel for “smirking” when he complained about the noise in the nightclub which was disturbing his sleep. Someone sent me this information as a “gotcha” for my debate. I don’t do stuff like that, since it is irrelevant and out of context.

Now, imagine that every single article about McDonald mentions this incident. Imagine there are demonstrations outside his house every day for his history of hitting women. Imagine that his name is associated with woman beating and the very name McDonald becomes toxic, that every time he speaks at an event there are op-eds against his being treated like a human being.

That’s what it is like being Israeli in the circles he inhabits.

Most of the libels against Israel are trumped up or false or out of context. But there are sometimes things that Israel does that isn’t right, like every state on Earth. The haters of Israel will harp on those, and try to take away all oxygen from any other story about Israel. They compare Israel against a mythical ideal, not against other countries that do worse – and most of them are far worse.

I have one question for McDonald. He was the Environment Editor for the Irish Times. Israel is by any measure a world leader in environmental issues, such as water recycling, desalination and re-forestation.

Has he ever once written a positive article about Israel in that area? And if so, did he manage to do it without mentioning something negative?

If not, I think it proves everything I am saying about him.