How much lower can a Jewish proponent of BDS descend? 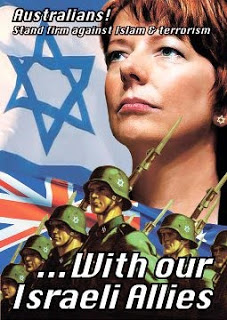 Sydney academic and “Theobald Jew” Dr Peter Slezak (can you wonder that a hapless namesake in the same city constantly dissociates himself from him?) has been to that well-known oasis of tolerance and diversity, of people’s and of women’s rights (not), Malaysia, to tell them a thing or two about his fellow-Jews.

Like Antony Loewenstein (originator of this charming fake poster some years ago) Slezak is a co-founder of “Independent Australian Jewish Voices (IACV)”, which on its emergence in 2007 was described by Dr Colin Rubinstein, executive director of AIJAC,  as “dangerous and unrepresentative” with some of its members  “clearly committed to the delegitimization of Israel”.

But don’t take only Dr Rubenstein’s word for it.  Associate Professor Mark Baker,  a left-leaning Jewish academic who’s among the principal Aussie supporters of J-Street has condemned the IACV’s “shallow and inflammatory rhetoric, its one-sided vilification of Israel, and its gratuitous reference to Holocaust memory,” noting that it’s “all about casting Israel as a pariah. Not a word about the peace process, presumably because the only peace its framers envisage does not include a future for Israel as the ‘democratic, national home of the Jewish people’ (JStreet phraseology)”.

According to a Malaysian newspaper:


‘The Jews are partially to blame for the anti-Semitism directed at them by the international community as Jewish communities are not doing enough to hold Israel responsible for Gaza atrocities, said Jewish academic Dr Peter Slezak.

“We have to be more subtle about blaming Jews as a whole for the Israeli government’s actions. But the difficulty is that Jewish communities around the world are uncritical supporters of Israel,” said Slezak.

“And to that extent, they do share some of the blame,” the Australia-based scholar added after delivering a talk titled ‘Solution to the Israeli-Palestinian Conflict – Proposal from a Secular Jewish Academic’ at Universiti Malaya on Monday.

The professor of philosophy at the University of New South Wales is among a handful of Jewish scholars strongly advocating for an end to the occupation of Palestine by Israel.

He agreed that not all Jews are supportive of Israel, but urged more of them to actively speak out against the atrocities in Gaza. “Unfortunately, Israel is acting in the name of all Jews. Therefore, they have the responsibility to say that it’s not in my name. And that I, as a Jew, do not accept that Israel is committing its crime and stealing Palestinian land for us,” he said.

Slezak added that Jewish communities need to stand up and speak up, and said that they don’t do it enough….

“The cause of this conflict is not Islam and it’s not the Palestinians, these are political problems we have to understand. Our job is to help clarify the real source of the problem and not to be manipulated by the propaganda,” he added.

Dr Slezak is on a week-long visit to Malaysia at the behest of several pro-Palestinian groups such as Boycott, Divestment, and Sanctions (BDS) Malaysia, Viva Palestina Malaysia, My Humanitarian Care, and the Universiti Malaya Palestine Research Group.’


‘Slezak reminded of the golden rule in Judaism, “Don’t do to somebody else what you would find hateful to you.”“It’s the universal principle that we should all follow.”’

Indeed. Tell that to the suicide bombers and knife intifadists, Dr Slezak.  As well as to the Malaysian authororites who permit the judicial whipping of women. 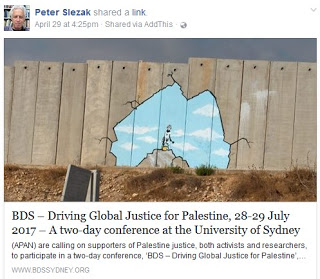 This July, the conference ‘BDS – Driving Global Justice for Palestine’ is being held at the University of Sydney, organised by the Department of Peace and Conflict Studies, Sydney Staff for BDS, the Australia Palestine Advocacy Network, and many other pro-Palestine organisations. We are looking for donations to bring speakers from overseas to the conference, which promises to be an important event in the year’s pro-Palestine calendar….

Here is more detail about the conference from their website:

The recent UN Security Council resolution declaring Israeli settlements in ‘flagrant violation’ of international law and calling for a halt to all settlement activity, followed by Israel’s retrospective legalisation of thousands of settlements on stolen Palestinian land, acutely raises the question of what steps can be taken to promote justice, along with genuine peace, in the region.

In line with the call from Palestinian civil society for boycott, divestment and sanctions, this conference, held to mark the centenary of the Balfour declaration and the 50th anniversary of Israel’s 1967 occupation of the West Bank and Gaza, will analyse the current politics of BDS in Australia and abroad, reflect on previous BDS activity, and contribute to greater public understanding of the BDS campaign.