Shavuot is the festival when the Book of Ruth is read. Ruth, a Moabite, pledges loyalty to her mother-in-law Naomi and joins the Jewish people.  Although Judaism does not encourage proselytism, it does accept bona fide converts. Here is the story by Ronnie Perelis  in HaSefaradi of two converts in the history of Sephardi Jewry: 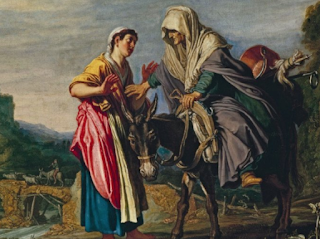 The 12th-century Andalusian-Egyptian polymath, Maimonides received a query from a convert named Obadiya who felt that because he could not trace his lineage back to the forefathers of the Jewish people he could not invoke their names in his prayers. We know a little about this intrepid religious searcher from documents uncovered in the Cairo Geniza.

Maimonides tells Obadiya the convert that Abraham, Isaac and Jacob are his fathers because he follows their teachings. Obadiya left his family and home behind in search of religious truth just like Abraham who left behind all that was familiar to follow God’s voice. Maimonides identifies the convert’s commitment to the right ideals and sacrifice on behalf of those ideals as the mark of inclusion in the group. By discounting the power of blood, Maimonides welcomes this outsider in:

Because since you have come under the wings of the Divine Presence and confessed the Lord, no difference exists between you and us, and all miracles done to us have been done as it were to us and to you. Thus is said in the Book of Isaiah, “Neither let the son of the stranger, that has joined himself to the Lord, speak, saying, ‘The Lord has utterly separated me from His people’” (Is. 56:3). There is no difference whatever between you and us. You shall certainly say the blessing, “Who has chosen us,” “Who has given us,” and “Who has separated us”: for the Creator, may He be extolled, has indeed chosen you and separated you from the nations and given you the Tora.

Belief in the One God, sacrifice, and commitment to Divine Law is what secures Obadiya the convert’s place within his new community. His foreignness, his gentile blood, is no longer relevant because he has embraced the ideals of his new community and thus has forged his place within their fold. Maimonides is unable to provide a robust family network for this foreigner but he can assure him a spiritual space among his religious brethren. How can it be that I—who descend from such vicious Jew-haters have a place beneath the wings of the Divine Presence?

In the early modern period we find another example of an outsider, tormented by the weight of his foreign blood, with all that it conjures up in the racially charged Atlantic world of the 17th century. Manuel Cardoso de Macedo was born into a well-to-do Old Christian 5 family in the Azores and through a surprising series of religious transformations—he first embraces Calvinism while living in England and then discovers Judaism during his time in the prisons of the Lisbon Inquisition—he found his way to the Jewish community of Amsterdam where after a formal conversion he lived out the rest of his life as a devout Jew.

Cardoso de Macedo adopts the Jewish name of Abraham Pelegrino Guer—Abraham the convert, the pilgrim, the wanderer. He wrote an eloquent spiritual autobiography about his religious journey that he begins with a fundamental question: How can it be that I—who descend from such vicious Jew-haters have a place beneath the wings of the Divine Presence?7 He talks about how deeply his father and his whole Portuguese society sought to destroy all vestiges of Judaism. He says that for his father “there would not be enough wood to burn all of the Jews”! Confronted with the weight of his blood, Cardoso seeks to retrace his steps towards the Law of Moses and the people of Israel in his autobiography and somehow write his way into the Jewish fold.