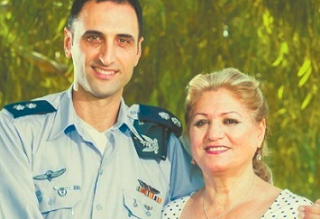 Eti Sionit Goshen was a 35-year-old mother of two under the regime of the Ayatollahs in Iran. As an employee in a government office she was well-placed to embark on a new career – forging documents for young Jews desperate to escape. (To be drafted into the Iranian army, then at war with Iraq, was a death sentence). Eti was denounced, jailed and tortured and it was ten years before she was able to escape herself to Israel. She  tells her hair-raising tale of horror  to Yariv Peleg of Israel Hayom. Read it all. (With thanks: Lily)

“One day, by chance, I saw a top secret document with an order barring Jewish emigration from Iran. I was mortified. I told my husband, and we started thinking about what could be done. Tehran has a rabbi named Baruch Hacham, who would help the young people escape somehow. The smugglers would charge a lot of money and it was a very dangerous road. Many were caught and thrown in jail.

“My father-in-law had just died, and they [Houshang’s family] decided to try and get two older brothers out [of Iran] through Hacham, but they were caught near the border and thrown in jail. My husband went to get them and was beaten up. But he paid a bribe and got them back. They then decided to try and smuggle the two younger brothers out. They were only 15 and 16, and so many soldiers had died in the war the army was starting to recruit really young boys. “Iranians lend great importance to identity. They would always ask, ‘Are you Iranian or Jewish? Jews were sent to the front line immediately. Going into the army as a Jew — that was a death sentence.”

Q: Were your husband’s younger brothers able to escape?
“He sent them through Hacham, but they were also caught near the border. Their mother was left alone, she was elderly and lived in another city. They [the authorities] wouldn’t issue her a passport because she was Jewish. We were also waiting for passports, but they gave us the runaround. We didn’t know what to do. “

At that time, in addition to passports and identity cards, there was also a third registry, a notebook that listed the details of the family. To leave Iran, you had to have all three documents. The solution we came up with was to pay Muslims for the documents. I stole stamps from the office where I worked and forged passports. Jews’ passports were red and Muslim passports were blue. That’s how we started helping Jews leave Iran.”

Placing themselves at considerable risk, the couple launched a forged passport “industry,” mostly for young men who were slated to be enlisted. “We never thought of ourselves. We were focused on helping the young people. I would forge passports, replace photos, stamp. I spent hours on end on it. We would buy Muslim passports. They could travel far more easily. But these were delicate transactions. We only got them from people we knew, in my workplace, my husband’s or friends we knew before the revolutions. We would spend a long time convincing them. After all, it placed them in danger as well.”

The illegal industry was exposed after a woman they forged a passport for apparently told a government official she had befriended about them.  “One night, we were at home with the kids, and all of a sudden regime officials came into the house. They’re not like the police here in Israel — they were like God. They could do whatever the wanted. They could kill with impunity. It’s like having Islamic State operatives show up on your doorstep.”

Q: Did they find anything illegal?
“They tore the house apart, pulled up tiles, and we weren’t allowed to say a word. They blindfolded us, and threw the children to the side [of the room]. We had materials in the house that we used to forge passports. At the time my husband was unemployed and he was involved in illegal money-changing, and there were papers saying he transferred dollars out of Iran, which was illegal. There was also a photo of my cousin, who immigrated to Israel and was in the Paratroopers Brigade, in uniform. God help me, I’m still terrified just talking about it.”

That night ushered in a chapter of horrors for the family. Fortunately, while forging passports, the couple had the sense to pose as Muslims. “We had documents saying we had converted to Islam. We also had Muslim marriage documents that we had poured tea over, to age them. We also had Khomeini’s book and a Koran, so the police were confused. They didn’t really understand who we were or what we did. The police said they were taking us in for interrogation. The landlord heard the ruckus and came over and I asked her to take the children to my sister. I wasn’t supposed to speak, so they [the police] hit me and threw me down the stairs.

“They beat the hell out of us during the interrogation. They used electric shocks … the torture was unimaginable. Then they showed us the picture the woman who informed on us, and I thought — that’s it. This is our death sentence. Then they threw me in a room that was pitch black, without food or water. “The next day they took me and my husband to a prison that is known as one of the world’s most infamous jails. They say even birds don’t fly there. If you go — you never come back. It’s a miracle we got out alive. It’s a miracle I’m sitting here.”

Q: Did your family know how you were doing?
“No. We didn’t get a phone call, or a lawyer. I had no idea what was going on with the kids. In Israel, an Arab terrorist gets a lawyer and he can go to school while in jail. We got nothing. We were nowhere.”

Q: What was prison like?
“They separated us immediately. They tied me to the bed and stretched me until I was sure my back had broken. I was beaten with a leather whip until I passed out. The men would beat me, even though they were prohibited to do so by their religion. Because they suspected I was Jewish they enjoyed it. They dragged me across the floor by the chador [full-body-length garment worn by women in Iran when in public]. I didn’t eat or drink for three days, I was half dead. “

I was interrogated every day. The interrogator would hit me repeatedly. ‘Tell me, you little stinking Jew, how did you fool the Islamic Republic?’ he would ask. ‘How dare you? Who did you work for?’ They thought we were a network. But I never broke. I never told them about anyone. I prayed that my husband wouldn’t talk. I didn’t want to place the families of the young people we helped in danger.”

Between interrogations, Goshen was thrown into a cell with Baha’i women, whose religion was also targeted in post-revolution Iran. “One of the women there taught me the Quran, and I also knew a little from my daughter, who went to kindergarten with Muslim children after the revolution,” she recalls.

“One day they took me in for questioning by an Imam. He told me to recite something out of a prayer, but Muslims have a purification ritual before [prayers] so I said, ‘I have no water for purification.’ He told me to go ahead anyway. So I sang what I knew. I did it wholeheartedly, I hoped it would save my life. Then he told me to recite another line that I happened to know from my daughter, then another line, which that woman taught me the night before. By some stroke of luck, he stopped me after the last line I knew. I don’t know what I would have done had he asked for even two more words. “My mouth was dry and my heart was pounding. It’s an indescribable feeling. Every day might be your last. The moment he told me to stop I said ‘Shema Yisrael’ in my heart.