Arabic media are reporting that a street in Hebron that had been closed for 20 years to Arabs is being re-opened on Thursday.

Hebron Mayor Tayseer Abu Sneineh announced an agreement to open Tel Rumeida Street in the Hebron towards the Wadi Al Haria area and Al Karantina roundabout after a 20-year closure by Israeli authorities.

It appears to be the street in red in the center of this detail from a B’Tselem map of area H2 in Hebron: 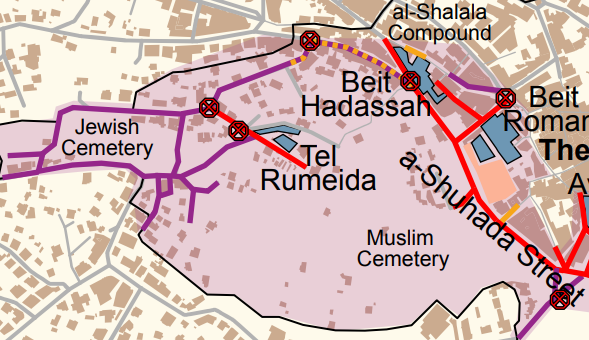 What gets lost in the headlines is that Israel eases restrictions on Palestinians as often as it imposes them. When the security situation improves, Israel can and does try to make things easier for Palestinians – who wants to man a checkpoint if it is not necessary for security? It is a delicate game – no one wants to be responsible for any terror attack that might occur as a result of such loosening of policy, and things have to be evaluate and re-evaluated constantly.

When Israel does try to make things easier for Palestinians, those acts do not make the headlines that new checkpoints do. People who read the news only see an Israel that is imposing more and more restrictions, and therefore see a skewed vision of the situation. But Israel releases prisoners as often as it arrests new ones, it allows more goods to be exported from Gaza without fanfare, and it has removed many checkpoints over the years as the security situation in Judea and Samaria have improved.

Remember, before the intifadas Palestinians had few or no restrictions on movement. Israel’s first responsibility is to provide security for its citizens and that invariably involved separation between the areas that terrorists originate and where Israeli citizens live.

Hebron is the biggest flashpoint due to the extreme violence that has happened there. But if Arabs would accept that Jews have lived there longer than the Arabs themselves, and terror attacks would end, there wouldn’t be any closed streets in Hebron. The IDF doesn’t arbitrarily choose to make the lives of Arabs miserable and no one on either side wants that.

There is always another side to the story. Too bad the media  always ignores it.