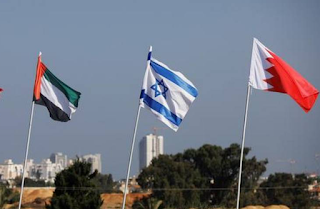 Who opposes Israeli normalization with the Arab world?

Iran, Turkey, Hezbollah, Hamas, the PLO, Mondoweiss, CodePink and the entire BDS crowd, IfNotNow, Jewish Voice for Peace, Students for Justice in Palestine, CAIR, and many other groups.
Who supports it?
Besides most Western nations we have Egypt, India, Oman, Saudi Arabia, and some dovish groups like Peace Now and J-Street.
How can you tell whether a group will oppose any treaties between Israel and Arab nations?
It is very simple. The groups or nations that want to see Israel destroyed are the ones who oppose these agreements.
It is a very consistent pattern.
And it works in reverse: if you see someone opposing the accords, the only reason is because normalization does not advance the destruction of Israel.
Everything else they say is spin, trying to justify their position after the fact in ways that don’t sound quite as genocidal as “Death to Israel.” But the goal of these op-eds are, in the end, indistinguishable from the goal of Iran.
This comes in very handy, for example when trying to distinguish between a virulent critic of Israel and an antisemite who wants to see the Jewish state destroyed.  Just ask them if they support or oppose peace between Israel and Arab states.
Clarity is something we rarely see in the Middle East, and these agreements bring us more clarity than anything else has in years.