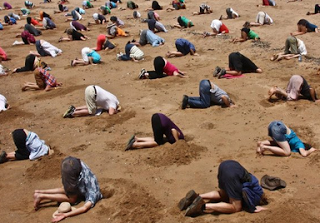 The Ostrich in Rome’s Pope’s denial that Islam is not engaged in a religios war with the West has of course been received with delight by weaklings, quislings, and fellow-ostriches everywhere.

“It’s not right to identify Islam with violence. It’s not right and it’s not true. I believe that in every religion there is always a little fundamentalist group….If I speak of Islamic violence, then I have to speak of Catholic violence”

has, as the BBC reports (the approval of his remarks by the leftist  broadcaster being, nonetheless, almost tangible, in its counter-examples), outraged many members of said Ostrich’s Pope’s own flock, with the hashtag #PasMonPape trending in the land where the aged Father Jacques Hamel was mercilessly done to death last week.

Unimpressed by his interpretation of the present conflict, the boys from Isis have issued a blunt message for His Holiness, though given his proclivities, it’s unlikely to stop him turning a blind eye as well as the other cheek.

And of course the Pope is not the only opinion leader in the West, clerical or lay, who refuses to see the enemy, much less see the enemy’s designs for what they are.

Contrast this proudly straight-talking guy regarding the future of Europe!

The anti-Trump brigade will (try to) have a field day with this!