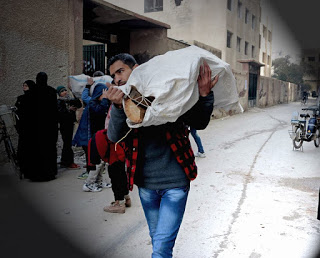 The latest statistics from the Action Group for Palestinians from Syria say:

Of course, the media (as well as Arab media) reports very little about Palestinian victims in Syria. One of the reasons is that a Palestinian group, the PFLP-GC, is actively starving the Palestinians in Yarmouk! In fact they have fought anti-Assad Palestinian forces over the years

Of the 79,000 Syrians of Palestinian descent who have made it to Europe, I’m nearly certain that none of them have been taken off the UNRWA rolls. We already know that about 200,000 Palestinians from Lebanon have left, many to Europe, and UNRWA still counts them as “registered refugees.”

I have seen a few articles about Syrian Palestinians fleeing to Gaza, but I am still not sure how they got in. A few smuggled themselves in through tunnels during Morsi’s reign in Egypt, but certainly not a thousand. Perhaps when Egypt briefly opened the Rafah crossing in those days they came in from Egypt.

The numbers of Palestinians who fled to Jordan have stayed pretty static for the past couple of years. Apparently Jordan is not accepting more Palestinians from Syria.