We know from very recent media reports that Jordan is currently navigating treacherous waters. Its economy is weak, prices are rising, incomes are not and government subsidies on bread and other essentials are being slashed or removed. Jordan’s GDP per capita is barely a quarter of the world’s average, roughly the same as Albania’s. In 1965 (according to the World Bank), Israel’s GDP was 2.7 times the size of Jordan’s; today (IMF estimates for 2018) it’s almost 7 times as large. The two countries have roughly the same size population and roughly equivalent resources.

We’re hearing that the Jordanian populace are angry and the fury is growing. There have been riots over the prices of basic foods.

On top of all that, there’s been an upsurge in grand larceny as this report from yesterday shows:


A series of armed bank robberies in Amman has rattled Jordan, with some activists blaming the country’s rising crime rate on alleged government corruption and failed economic policies. Activists say increased taxes and food and fuel prices have eroded the savings and salaries of the country’s poor, which has pushed some to resort to serious crime. Armed bank robberies are rare in Jordan, but Amman has recently seen four heists in branches of the Societe Generale Bank Jordan and Arab Bank – Jordan… Many Jordanians have since expressed seeming delight in the robberies on social media, in a reflection of anti-government sentiment… Activists say government policies were the main catalyst contributing to the increase in violent crime, something that was rare until recently. They point to the recent proliferation of violent street gangs, car thefts and drug trafficking rings that have dominated some sections of Amman with impunity… [“Jordan bank robberies rattle Amman, activists blame government“, Al Jazeera, April 21, 2018]

While Al Jazeera speaks of four heists, you probably know the Jordanian media speak of a larger number [“6th bank robbery in Amman since start of year“, Jordan Times, April 18, 2018]. This surely worries you and your ministerial colleagues.

The specific way you chose to address this problem caught our attention and made us want to get in touch. Here’s the full text of a report we spotted in an independent Jordanian newspaper from a few days ago, quoting you:


AMMAN: Government spokesperson and State Minister for Media Affairs Dr Mohammad Momani condemned the sweeping sympathy for bank robbers on social media today, Thursday, and described sympathisers as criminals. During the Minister’s weekly appearance on Radio Jordan, every Thursday, he said that publically [sic] condoning criminal activity is a crime. The same goes in various countries around the world, he claimed. On Jerusalem, Mr Momani reaffirmed that Trump’s decision to relocate the US Embassy from Tel Aviv is illegal and hurtful to the peace process… It feeds radicalisation as it only fosters frustration and desperation, he underlined. [“Gov’t Speaker: Sympathising with Bank Robbers is Crime“, Al Ghad, April 19. 2018]

We traveled to Jordan a couple of times before – but not after – our child’s murder at the hands of a Jordanian woman in 2001. These were brief stays and we weren’t tourists. The meetings we had were with impressive decision-makers and thought-leaders. We enjoyed the experience. But to be clear, we don’t claim special knowledge of your country. On the contrary – much about it puzzles us.

To illustrate: you underline (using Al Ghad’s words) that radicalisation “fosters frustration and desperation“. That sounds right to us. For what it’s worth as non-Jordanians, we would encourage you and King Abdullah II to keep radicalisation of Jordanians as much under control as possible. Radicalisation is a widespread problem right across the Arab world. But it’s not without solutions, provided the government leads the way.
But then what Jordan is doing to lead the way doesn’t seem very well-advised.

How your country has dealt with Ahlam Tamimi illustrates the point dramatically.

There’s no need for us to tell you that among Jordanians, she’s a celebrity, a figure of huge admiration, who has appeared often in your media and has a high public profile. She shared a public platform with several Jordanian lawmakers and a former Jordanian prime minister just a few weeks ago [“05-Jan-18: In Jordan, the FBI fugitive Ahlam Tamimi pays tribute to her slapping/taunting/kicking Tamimi cousin“].

But this is an open letter, so we will explain to our readers that Mrs Tamimi is an admitted agent of Hamas, the first female to be recruited by the Islamist terrorists and one of their most productive. She boasts explicitly and often of the killings she masterminded and executed at the Sbarro pizzeria in Jerusalem. She takes credit for choosing a site where significant numbers of children could be blown to pieces. Jewish children, of course; she makes clear that for her the conflict and the homicides are all about religion.

Tamimi faces Federal charges brought against her by the US government that were unsealed just a year ago; she is on the FBI Most Wanted Terrorists list with a reward on her head of $5M; and her extradition has been requested by the US government under the fully-in-force and undoubtedly valid 1995 extradition treaty your kingdom signed with the Clinton administration. Several Jordanian felons have been extradited by Jordan to the United States since the treaty came into effect. Jordan pretends this is not so and journalists seem to be cowed into accepting the pretense.

For reasons most Jordanians understand (the people she massacred were Israelis and Jews) and which your country’s leadership obfuscates, Jordan says it will not hand her over to the US authorities. Tamimi has publicly thanked the Kingdom of Jordan and its courts for this, and for standing in solidarity with her. Her family has praised Jordan’s judiciary – which of course is answerable to the king – for its “integrity, justice and patriotism” [source].

For the past several years and up to today, we and several Jordanian friends check the Jordanian media closely and have not found a single instance yet of a Jordanian official or judge or religious leader or political commentator distancing your country from the horrific slaughter which turned Ahlam Tamimi into a Jordanian hero.

Not one word of criticism in any part of your media. No public arguments. No evident self-examination. No dissent from the popular view that this homicidal sociopath is a champion of Jordan, a figure for your society’s children to grow up and emulate.

Then there’s the matter of the Jordan Media Institute.

As the political official responsible for Jordan’s media, you’re surely aware of the matters we described here [“10-Dec-14: In the Arab world’s most promising new journalism school, a passion for murder and hatred“]. Your government created a school for training a new generation of Arabic-language journalists along what were to be Western lines, and right there on their website those best-and-brightest budding editors and reporters declared that Ahlam Tamimi was their role-model. 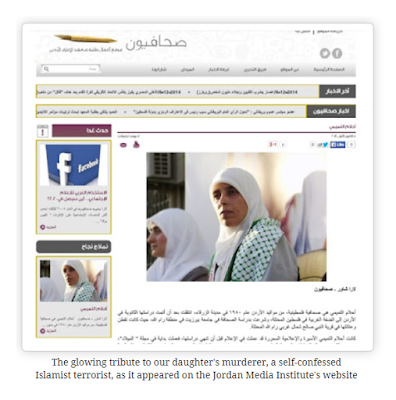 That astounding, appalling veneration for a confessed mass-murderer of Jewish children remained on view and uncontradicted right up until we publicized it. We successfully persuaded several (not all) of its foreign supporters to back off and to discontinue their funding.

By the way, we tried to speak directly with the JMI. Our attempts to get into a dialogue with its leadership were rebuffed in a blunt, ugly and completely unacceptable way. For all anyone knows, the students who graduated from the JMI since 2015 have taken up positions in the Arabic language journalism industry fully committed to the idea that their professional role-model is a mass-murdering Jordanian female who is on the run from the US legal system.

What impact will that have on your plans to reduce radicalisation and counter all the frustration and desperation? Perhaps not much given that Jordan’s press freedom is in such bad shape:

Jordan drops two places on World Press Freedom index | Jordan Times | Mohammad Ghazal | Feb 12, 2015 | 21:44 | AMMAN — Jordan has dropped two places on the World Press Freedom Index 2015, ranking 143rd among 180 countries, as the government said it will continue to develop media freedom in the Kingdom. The Reporters Without Borders annual index released Thursday showed that Jordan continued a decline in press freedom, as it was ranked 141st in the 2014 index and 134th in the 2013 index. At the Arab level, Jordan ranked 11th… Commenting on the report, Minister of State for Media Affairs and Communications Mohammad Momani said: “We will continue to develop our freedom of expression.”

You are quoted there yourself, saying you will “continue to develop [Jordan’s] freedom of expression“. That was three years ago.

So how well did you do in the following years? Not too well. In the most recent index, Jordan is in 138th place – lower than in 2013, lower than in 2016. Jordan’s press freedom is almost at the bottom of the world league… and sinking, as we wrote here.

Here’s something else we wrote back then that deals directly with how to defeat radicalisation:


A society claiming to be at war with the terrorists and aspiring to “continue to develop” its “freedom of expression” and “media freedom” has to have a strategy that goes beyond self-aggrandizing press statements. It also needs to be substantially more upfront with the outside world – and with itself, it seems – about the lethal support for jihad that infects the ranks of key parts of its population, including some of the journalists whose future careers it is proudly hailing… [“13-Feb-15: Jordanian accuracy“]

We still hope and expect to see Jordan comply with its international treaty obligations described well here [“Pressure on Jordan: Refusal to extradite mastermind of deadly 2001 Sbarro suicide bombing in Jerusalem contravenes international law and agreements“, Michelle Munneke – American University Washington College of Law, National Security Law Brief, October 28, 2017] and hand Tamimi over to the US so she can be brought to justice.
If Jordan’s leadership is sincere about suppressing radicalism, it will share that aspiration.
Sincerely,
Frimet and Arnold Roth
Jerusalem

(A version of this open letter appeared originally in Times of Israel on April 23, 2018 under the title “Extradite Tamimi: An open letter to Jordan’s media minister“.)