TOP NEWS
http://jewishrefugees.blogspot.com/2018/07/200-jews-die-in-cairo-during-summer-of.html
As the first Arab-Israeli war raged, the Muslim Brotherhood vented its anger and desire for revenge at the Jews of the old Cairo Karaite quarter by planting bombs. Some 200 Jews were thought to have died during the summer of 1948. Story in Haaretz: 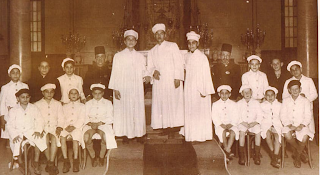 At the Nebi Daniel synagogue in Alexandria, 1940s

Egypt’s Jews thought they could distance themselves from the Zionist movement. Community leaders, including the chief rabbi and the presidents of both the Cairo and Alexandria Jewish communities, publicly repudiated Zionism, and those who were active in the movement went underground.

In 1947, the government, which until then had at least nominally protested anti-Semitic actions, began to take official measures against Egypt’s Jews. Foremost of these were the Company Laws, which set quotas on the percentage of non-citizens, the country’s Jews included, that could be employed by incorporated businesses.
After Israel’s declaration of statehood, on May 15, 1948, matters deteriorated further. Jews were rounded up for Zionist activity, which was now illegal, martial law was declared, and the assets of many Jewish firms were confiscated. These official measures were accompanied by more attacks by Islamists on Jews and their property.
When the bomb went off on June 20 in the Karaite Quarter, the authorities initially claimed that it had been set off by Rabbanite Jews, who constituted the majority of Egypt’s Jewish population. They also blamed it on the accidental detonation of fireworks that had been housed in Jewish homes. But details of the crime were censored in the press, and even the local Jewish newspaper did not fully cover the event.
That terror attack was followed by five more attacks on Jewish sites in Cairo during the summer and fall of 1948: the July 19 bombing of two Jewish-owned department stores, and similar attacks on two additional stores on July 28 and August 1; the September 22 blast in the (Rabbanite) Jewish Quarter, which killed 19 people; the destruction of a large Jewish-owned publishing firm, Societe Orientale de Publicite, on November 12. One source puts the number of Jewish deaths to bombings and other murderous attacks, in July 1948 alone, at 200.