Prayers were recited  in 18 synagogues across the world in remembrance of Jews buried in inaccessible cemeteries in Arab lands.

Among the synagogues who took part  in a mass Kaddish and Hashkaba on Shabbat 24 November were congregations in  Canada, the US, the UK, Mexico and Germany.

The mass Kaddish was the initiative of  a Montreal resident of Iraqi origin, Sass Peress.   For decades, families have been prevented from reciting prayers at the gravestones of their loved ones buried in Arab lands.

Over a year ago, Peress embarked on a project to locate and clean up his grandfather’s grave in the Sadr City Jewish cemetery in Baghdad, Iraq. This was done in secrecy in case of official interference.  Before long the clean-up was extended to 150 graves. Their inscriptions were photographed and translated into English by Sami Sourani, a historian of the Iraqi-Jewish community based in Montreal. The catalogue of cleaned-up graves  has beenuploaded to the Spanish synagogue’s website. 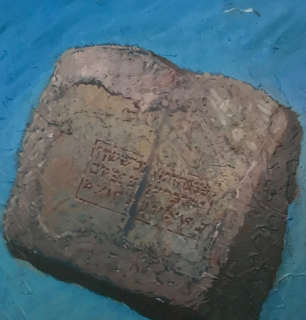 Painting by Sass Peress’ cousin Sol of their grandfather’s gravestone.

Encouraged by the response, Peress hopes that the prayers will be recited annually. He has learned of similar clean-up and cataloguing initiatives in other Arab lands, and  has set himself a target of l00 participating synagogues for next year. He also intends to obtain a photographic record of all 3,000 graves in the Sadr City cemetery.

However, Sass Peress has been heartened by the acts of kindness which made his project possible:

“An important message  is that while there were and remain people who do bad things of all faiths and nationalities, none of this initiative would have happened without the kindness of two Iraqi Muslims.  We must grow the opportunities for goodness between people. Hopefully these kind acts are the seeds to many more.”