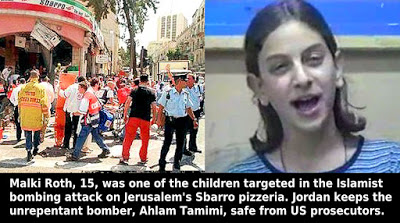 A year ago, on this blog, we posted a rueful summary of events that had taken place since the unsealing of US Federal charges against our child’s killer on March 14, 2017, two years earlier. See: “14-Mar-19: Two years after Federal charges are unsealed, Ahlam Tamimi remains free. How is this happening?“

Ahlam Tamimi remains today, as she has since October 18, 2011, free in Jordan, unrestricted in her movements. She’s able with ease to publish her views widely, undisguisedly contemptuous of the efforts made by the United States and her victims to see her brought to American justice. Without any doubt, she has become a celebrity because of the grotesque savagery of which she openly boasts and to which she confesses.

Three years have now passed. Here are some of the events of this past year as reflected in our blog postings:

To stay in touch with our efforts, please send your name and contact details (never to be shared with anyone else, and not used for any other purposes than keeping you informed of the Tamimi pursuit) to us via thisongoingwar@gmail.com and follow us on Twitter @ThisOngoingWar