It appears that the pain of a child’s murder is so inconceivable in our society that it is down-played. Swept under the carpet.

Over the eighteen years since the terror bombing at Jerusalem’s Sbarro pizzeria, I have learned that most people are bored, disconcerted or annoyed by my dredging up that “ancient incident”.

Closure, moving on, forgiving are the trendiest notions circulating in the world of grief.

A few years back, my husband, who had just delivered a talk about terrorism in his hometown, Melbourne, overheard an old acquaintance gripe about him. “Hasn’t gotten over that yet?”

I recall a CNN journalist reporting about a tragic mass shooting in the US involving children, commenting “The families of the victims certainly have several tough weeks ahead of them.”

It appears that the pain of a child’s murder is so inconceivable in our society that it is down-played. Swept under the carpet.

I vividly recall the silky feel of my Malki’s hair, the way we swam the crawl together holding hands, the way we always walked up the ramp to our car arm in arm, the tears of pride I would shed whenever I heard her play the flute in a concert.

Her smile as she walked through our front door was infectious.

Her concern for anyone with disabilities was incomparable and unique for a teen. It was expressed not by vacuous words of compassion but rather active involvement with them.

Malki sought out places to volunteer as a caregiver even to the most profoundly affected children.

That included her youngest sibling Chaya who suffers from a rare genetic illness that includes severe epilepsy and blindness. Malki’s tenderness and devotion to her were incomparable.

And I remember the last time I heard her voice; she phoned me an hour before her life ended and we closed always, with the words “I love you.” 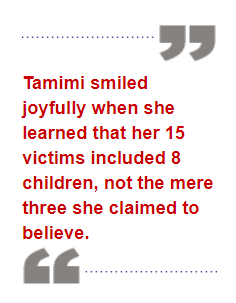 For the past eight years, our grief has been exacerbated by anger over injustice. The mastermind of that terror bombing, a Jordanian terrorist called Ahlam Tamimi, sentenced to 16 life terms in an Israeli court, was freed in the 2001 Shalit Deal.

She was “exiled” to her home – Amman – where she was reunited with her family. Some exile.

On March 14, 2017, the US Department of Justice unsealed charges against Tamimi and said it was requiring the Jordanian regime to extradite her to Washington. This was due to Malki and two other victims of that attack being US citizens.

But Jordan’s King Abdullah II has provided Tamimi with refuge, refusing to abide by his kingdom’s 1995 extradition treaty with the US.

My husband and I have asked that US officials pressure the king to hand over the monster he is protecting. Instead, the current US administration fetes him and his family, receives him in the White House as an honored guest, lavishes his shaky kingdom with massive cash gifts and other support.

The terror attack on Sbarro was unique in several ways.

One family was nearly decimated: a mother, father and three of their eight children perished.

Another couple lost their one and only child along with the baby she was carrying who would have been their first grandchild. I visit that bereft mother regularly as she now faces myriad health crises, confined to a wheelchair.

Sbarro is also unique in that Tamimi boasts to this day of “her operation”. She has described in televised interviews how she scoured Jerusalem’s city center for the perfect target – one that would be filled with women and children.

For years she hosted a weekly program beamed from Amman to viewers throughout the Arab world on Hamas’ Al Quds TV station.

She smiled joyfully when she learned that her 15 victims included 8 children, not the mere three she claimed to believe.

And yet she is safe, free and raising a family. Every day of this reality is another stab in our hearts.

This week, grieving Americans were assured by Federal authorities that the El Paso shooter who murdered 22 innocent victims would be deemed a terrorist. He would receive “swift and certain justice.”

The victims of terrorist Tamimi are still waiting for that.

Frimet Roth’s daughter, Malki, was murdered in the Sbarro terrorist attack at the age of fifteen. She had gone to enjoy a summer vacation pizza with her friend Michal Raziel, who was killed with her. Frimet is a freelance writer. She and her husband live in Jerusalem with their family. More from the author ►