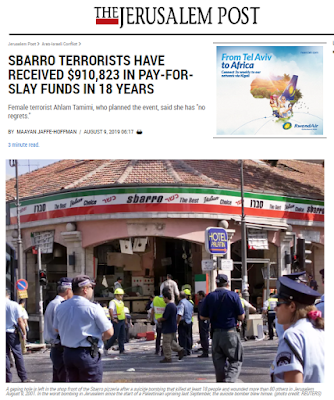 Basing herself on the fine investigative work done routinely by Itamar Marcus and his colleagues at Palestinian Media Watch, Maayan Jaffe-Hoffman reported in the Jerusalem Post on the role played by money in the lives of the terrorists who destroyed Jerusalem’s Sbarro Pizzeria exactly eighteen years earlier.

Here’s how it starts:


Eighteen years ago, on August 9, female terrorist Ahlam Tamimi smuggled a bomb in a guitar case into Jerusalem and led a suicide bomber to the crowded Sbarro pizza shop in Jerusalem’s city center.

Suicide terrorist Izz Al-Din Al-Masri ate a slice of pizza and then blew himself up, murdering 15 people, seven of them children, and wounding close to 130 others.

“I have no regrets,” Tamimi told Channel 1 TV in an interview that was recently rebroadcast on Palestinian Authority TV. “No Palestinian prisoner regrets what he or she has done.”

Since that fateful day, in which two Americans – Malki Roth and Shoshana Yehudit Greenbaum – were among the murdered, the PA has paid the seven terrorists who helped orchestrate the attack as well as Al-Masri’s family $910,823 (3.2 million shekels), according to a report released Thursday by Palestinian Media Watch.

The report concludes with some observations about the catastrophic policies of the Mahmoud Abbas regime:


“The Palestinian Authority glorifies all its terrorists, including child murderers and suicide bombers, as heroes,” explained Maurice Hirsch, PMW’s head of legal strategies in a related release. “In addition to granting the terrorist prisoners a monthly salary, the 2004 PA Law of Prisoners and Released Prisoners prohibits the PA from signing any peace agreement that does not include the release of all the Palestinian terrorists, including the child-murderers who carried out this attack.”

In 2018, the PA admitted to spending $134 million in salary payments to terrorists. Currently, every terrorist salary starts at a minimum of NIS 1,400 per month and can reach as much as NIS 12,000 month after 30 years. 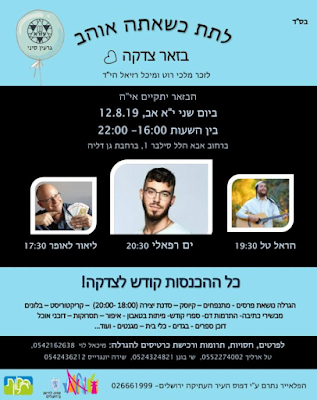 
In the park down the street from where we live in Jerusalem, the local teens are putting final touches today to the annual charity bazaar held every year the day after Tisha B’Av. The bazaar exemplifies how Israel and its children deal with the bitter experience of ultra-violent hatred like that which blew up the Sbarro pizzeria 18 years ago today and obliterated so many futures. My daughter Malki’s life ended there that day.

How we manage and use resources says a lot about society. Money, spent wisely, would make Palestinian Arab lives better, improving their prospects in life, their health and education.

The chronically insolvent Mahmoud Abbas regime that lives from foreign aid chooses loudly, aggressively and without shame to devote a massive share of its budget to honoring the killers of children and to nurturing yet more of them. Tragically, this is one of the few ways the inept Palestinian Authority manages to change its hapless subjects’ destiny.

The children on our street raise substantial funds each year from a fine event that remembers Malki and her dearest friend Michal Raziel. Their values symbolize and honour Israel and the Jewish people’s efforts to create better futures – tikun olam. It’s not an outlook our Arab neighbors share with us.

Eventually it will prevail. But only after the politicians behind the foolish funding policies of the governments refilling Abbas’ purse understand the chronic damage they do and stop.

If you’re in Jerusalem tomorrow, August 12, 2019, you won’t regret coming along to the annual Ezra Charity bazaar that honors the lives of our daughter Malki Roth and her friend Michal Raziel. It’s held in the northern Jerusalem community of Ramot: jumping castle, face painting, caricatures, live performances by Yam Refaeli and Harel Tal and the magic act of Lior Laufer. Proceeds of the bazaar benefit the Malki Foundation.

That’s the official poster above, with details. Feel free to email us [click] if you need translation or directions.