The Turkish-Jewish community is losing 1, 000 members every year owing to the runaway state-sanctioned incitement and hatred Jews encounter at school, in the supermarket and in nightclubs, Haaretz reports:

ISTANBUL – The caretaker and three other Jews came to Istanbul’s biggest synagogue on Friday. After a short discussion, they decided not to open Neve Shalom for Shabbat prayers, since there weren’t enough people present for a minyan. 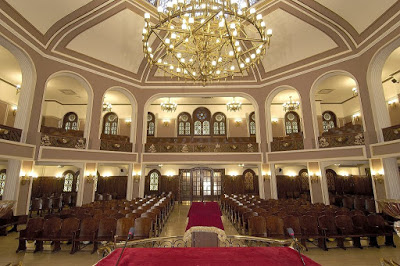 “Once we even had a minyan on weekdays,” says the beadle, who asked for his name not to be published. “On Saturdays there were always 30-40 Jews at prayer, and they’d be joined by Israeli tourists. But today it’s a museum.”

The synagogue’s fate tells the story of Turkey’s dwindling Jewish community, which is dealing with rising displays of anti-Semitism and profound fears for its future.

“We’re not afraid of Islamic State and Kurdish terror – that’s directed against all Turks,” says another community member, who also wished to remain anonymous. “The problem is with our neighbors and the neighbors’ children we grew up with. Today, they are fed with wild incitement and treat us and our children with hatred and anti-Semitism. Our problem is at school, nightclubs, the supermarket.”

The synagogue is located in the heart of the city’s old Galata neighborhood, where Jews settled on first reaching Istanbul. Many of the Jews who were expelled from Spain in 1492 settled in the Ottoman Empire and until World War I the Jewish-Turkish community numbered some 150,000.

After the Great War it lost half of its population to Israel, Europe and the United States, and has been in constant decline ever since. By the time Recep Tayyip Erdogan’s Justice and Development Party rose to power in 2005, the community numbered 19,500. It fell to 17,000 over the following decade and has fallen by a further 1,000 in the past year.