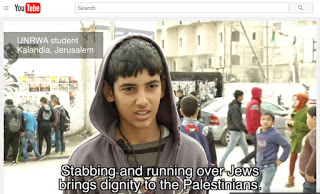 A Hebrew report posted last night (Sunday) on the Ynet website – we haven’t seen this confirmed anywhere else yet – says a senior person in UNRWA’s engineering department was elected to a senior position in the Hamas leadership in last month’s elections.

Ynet says Muhammad Al-Jamassi was voted into a position on the Hamas Gaza polit-bureau. His access to funds and to building materials is thought to be of special advantage to the Islamist terrorist regime.

We expect there will quickly be some confirmation or denials. Meanwhile we offer some background and context via two of our recent blog posts:

How shocked should UNRWA’s leadership be? For years (as we wrote here last week) they have been swimming in a cess-pool of radical Islamic, Hamas and extremist Arab ideology and activity. They see and know what they want to. Not more and surely not less.

At every level of its operations in Gaza and Jerusalem and in Judea and Samaria, UNRWA plays a knowing, indispensable role in enabling some of the most hideous hate-based education to be found anywhere in the Middle East.

The phenomenon of Palestinian Arab children with knives in their hands and a passion for Jewish blood in their hearts – the weaponizing of children – is the return on decades of UNRWA investment, almost entirely funded over sevenn decades by Western countries, and almost not at all from Arab sources.

The whole shabby undertaking long ago needed to be shut down.