I was scrolling through the large amount of anti-Israel propaganda being released this week by Iran for “Quds Day” when I came across a supposed “op-ed” in Zimbabwe’s state-owned Herald newspaper.

The Herald is a joke, only including articles approved by Zimbabwe’s authoritarian government. And that government brutally oppresses and often executes opponents, prohibits homosexuality, and defends China’s treatment of Uighurs.

So, naturally, it published this op-ed from its Iranian embassy filled with the typical absurd lies of the Iranian regime. 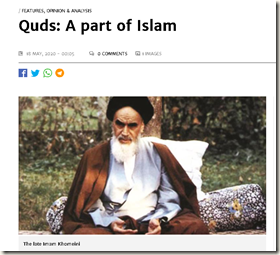 Here it is, if you are unfamiliar with Iranian propaganda.

Imam Khomeini, the founder of the Islamic Republic of Iran, after the victory of the Islamic Revolution, designated the last Friday of Ramadan as the day of Quds, presented to Muslims, freedmen and the oppressed of the world in this day and age.

Every year, on this day, the free people of the world march in support of the oppressed people of Palestine and condemn the crimes of the usurping Zionist regime.

Famous intellectuals like Gandhi, Mandela, Chomsky and even athletes and some Hollywood actors have always condemned the crimes of the Zionist regime.

The Zionist regime is no more than seven decades old and is the product of colonialism.

Contrary to the claims of the Zionists, who claim to be the original owners of the Holy Land, citing the rule of David and Solomon, historical evidence shows that the main inhabitants of the Occupied Territories were Arabs who entered Palestine from 2500 BC and ruled those lands for 1 500 years.

Quds Sharif has been declared the eternal capital of Israel since the Zionist occupation in 1967.

The Zionist occupiers, with the support of the world’s tyrants and colonialists, forced the Palestinians to leave their homes and lands in one of the largest forced migrations in history.

Quds is a symbol of the unity and determination of the free and oppressive people of the world amidst the Zionist military crimes and the arrogant supporters in Palestine and Gaza.

Quds Day is the day of resistance of the oppressed of the world against the arrogant and the day of the cry of oppression of a nation that with the blood of its children reveals the ugly face of the usurping Zionist regime.

This year’s Quds Day is more special than any other year, because it coincides with the day 700 000 Palestinians were evicted from their homes on the day of the tragedy, the Day of Nakbah.

Along with all the freedom fighters and peaceful people of the world, we can once again create the necessity and obligation of the oppressed Palestinians and the veil from the evil face of these Zionist usurpers.

Human rights is one of the concepts that Western countries, which today support Zionism, have essentially created and developed.

The crimes of the Zionists in the occupied territories and the Gaza Strip violate these laws.

In other words, the Zionists are also considered criminals within the framework of the laws enacted by their supporters.

The Israeli government’s treatment of Palestinians, for example, has become like an apartheid system. Resolution 3379 of the UN General Assembly, adopted on November 10, 1975, also condemned the Zionist regime as a racist system.

The resolution was adopted in the 2 400th session with the participation of all members (72 positive votes, 35 negative votes and 32 abstentions.

Clarifying the international community’s mindset on human rights abuses during the years of occupation by the Zionist regime, including terrorism, the illegal construction of Jewish settlements, the construction of a racist retaining wall, and the lack of citizenship services such as drinking water and repelling urban waste to the Palestinians and violating the freedom of expression of Palestinian writers and artists seems essential.

The intellectual foundations of Zionism are so irrational, racist, and contrary to the principles of Judaism that even many Jews oppose it.

These Jews have also set up anti-Zionist movements in order to create a barrier to Zionist oppression in the occupied territories and elsewhere.

As a result of the exorbitant costs of propaganda and the Zionist media, many people around the world mistakenly consider these criminals to be oppressed who commit crimes in self-defence.

One way to correct this misconception is to explain the racist views of thinkers and prominent Zionist figures.

These people clearly consider themselves superior to other peoples of the world and give themselves the right not to be bothered by any crime to occupy Palestine.

The importance of Holy Quds is due to the fact that this holy land, the place of life and resurrection of the divine prophets, was the first qibla of Muslims and the place of the heavenly ascension of the Holy Prophet (PBUH), just as Jerusalem is of special religious importance to Christians.

The article was provided by the Embassy of Iran (Cultural Centre)

I especially like how they imply they have nothing against Judaism but implicitly deny any Jewish connection to Jerusalem.