You Can’t Tell People The Truth About Me! That’s Slander!

By Ashraf Hakimi, Students for Justice in Palestine 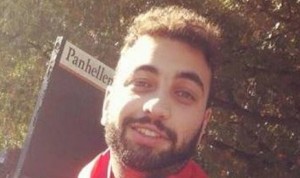 I’ve had enough of pro-Israel propagandists harming the Palestinian Muslim cause by taking my exact words, in context, and making them public, which results in people considering me a bigot and supporter of violence. You can tell the truth about me! That’s slander.
The Palestinian cause will never make the inroads it needs to make in American society if the public gets the wrong idea about our movement – which is to say, exactly what our movement is about. It will not do to have Americans realize we stand for all the things they oppose: religious and ethnic discrimination, genocide, violence, dehumanization of Jews, and sundry other Palestinian values. If Americans get the impression that we are exactly who we are, we don’t stand a chance of garnering enough sympathy to affect policy. So it’s not fair, and probably immoral, to have these facts exposed where everybody can know them. It’s damaging to our cause, and therefore slanderous.
Yes, technically, slander refers to untrue statements, but since my cause by definition represents truth – it is, after all, the one I choose to promote – then other things that happen to be true in terms of facts and the like must not get in the way of advancing that cause. All you have to do is redefine truth, and you can redefine slander to mean what we want. We do it all the time. Look at what our movement has done with “peace,” “Apartheid,” and the term “Palestinian” itself. That was a masterstroke, that last one.
But I digress. The point is, when my allies and I get filmed calling for the murder of Jews, or excusing it, that cannot be allowed to see the light of day. Similarly, it is slanderous – remember, we’re using my definition of it – to take posts or comments any of us make on Facebook or Twitter or whatever, and show them to people outside our movement. They just won’t understand. They’ll get all caught up on the fact of our trampling free expression by shouting down anyone who disagrees, or of our engaging it what they would consider slander, and miss the real message, which is that Israel has no right to exist, Jews are ape-pigs, Jews control the media and banks, there’s a genocide of Palestinians, our culture is being erased, we were always there, and other truths that inconveniently don’t have the facts to support them.
It’s slanderous, I tell you.