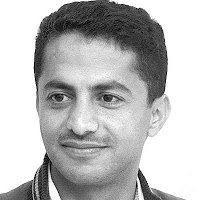 Ali al-Bukhaiti, a Yemeni politician who used to be part of the Houthi party but quit and became a major critic of it, has written a scathing indictment of Islam in the Yemeni news site Cratersky.

Under the title “Islam and terrorism – between truth and deception,” he writes:


Islam, which is in the curricula of our schools and government universities, is the problem, not the Muslims.
– ISIS works using the approach of Islamic conquests.
– Within every Muslim believer in our heritage literature is a potential terrorist waiting for empowerment.
– All the Islamic schools of preaching are, to varying degrees, waiting for empowerment.

And if we speak openly as Muslims, much of what is done by Al-Qaeda and even the Muslim Brotherhood, the Houthis and the other extremist groups when it governs a region is the real Islam, which is found in the books of fiqh and the prophetic biography of the different sects without exception and some extreme interpretations of verses in the Holy Quran.

..I talk about the correct and frequent conversations and compiled between all the doctrines of Islamic Sunnis and Shiites without exception, including the story of the invasion of Bani Qurayza, led by the Messenger of Allah in the fifth year of migration, the Jews of Bani Quraizah in Madinah, and ended with the surrender of Bani Qurayza on the condition of arbitration, and the sentence was to kill men and and take wives and children captive and divide their wealth and land to Muslims.

The execution was carried out in the Jews of Beni Qurayza. The men who had reached the age of fighting were executed, whether they participated in the crime of treachery – which was the cause of war against them – or did not participate. Then the women and children were taken away and converted as Muslims in the battle. Those were the practices in many “Islamic conquests”.

…The children were taken captive and enslaved, the women were sexually abused.

Imagine this scene with me  of a Jewish family from Bani Qurayza, consisting of six people, for example, husband and wife, 18-year-old boy, 13-year-old girl and children 8 and 9 years old, The husband and the eldest son are killed, their house, property, homes and lands were divided, the rest of the family was taken away and distributed to the Muslim Mujahideen. The mother raped by a Mujahid of the Quraish and the older girl raped by another Mujahid.

Is the scene of terror and terrorism the mercy of Islam, which they told us repeatedly? Isn’t this the Islam of ISIS? Convert to Islam or give us a tribute, and if you refused we kill you, we loot you, and your wife and daughters were abused.

We are always pretending to ourselves that some Muslims are bad but not Islam. The truth is that the problems is in Islam and not in Muslims. I’m talking about the Islam found in the books of the Sahih and mothers of the books of the doctrines, which contain a lot of fatwas and da’is, And talk about the “Islamic conquests” of how to deal with Christians and followers of other religions, we must recognize, without flinching, that the correct Islam is found in those books….All these doctrines and imams recognize the legitimacy of the execution of the prisoners of Bani Qurayza and the captivity of their women, which contradicts several verses of the Koran. How to execute even those who did not participate in treason, women and children who are blameless, and recognize the legitimacy of forcing people to Islam or tributes or taking the captives and money contrary to many verses.

…
We must admit that within every Muslim who believes in these narratives is a latent terrorist. …That is why we must review our religious heritage, criticize it and correct it. Otherwise, terrorism will remain on our necks, waiting for favorable circumstances or intrigues or conspiracies to spread its fangs within our societies.